Samsung Galaxy J2 supports Android OS, v5.1.1 (Lollipop), It offers Exynos 3475, It presents Quad-core 1.3 GHz Cortex-A7, It comes with Mali-T720, It contains superb expandable memory via card slot, microSD, up to 128 GB, It provides you with an internal memory of 8 GB, and it contains 1 GB RAM.

Samsung Galaxy J2 supports a primary camera of 5 MP, f/2.2, autofocus, LED flash, It contains features such as touch focus, geo-tagging, face detection, It offers a video of [email protected], and it includes a secondary camera of 2 MP, f/2.2. 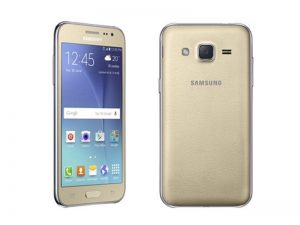 Samsung Galaxy J2 includes Bluetooth v4.1, A2DP, It presents GPS, with A-GPS, GLONASS, It offers FM radio with RDS, recording, It contains micro USB v2.0, USB On-The-Go, It has got rich numbers of sensors such as proximity, and accelerometer.

Samsung Galaxy J2 has got messaging like SMS, MMS, Email, Push Mail, IM, It offers Browser HTML, It has got a photo/video editor, It brings a document viewer, It supports Li-Ion 2000 mAh battery, Talk time is up to 11 h (3G) & Music play is up to 41 h.

Samsung Galaxy J2 offers an operating system that is the latest version of Android v5.1.1 ( Lollipop), it is stuffed with the Samsung’s own custom user interface, It presents 1.3 GHz Cortex A7 CPU with Exynos chipset that helps in lower consumption of battery power.

Samsung Galaxy J2 is powered with Mali-T720 that is better than Adreno 306 GPU, It presents good battery life, It offers OTG cable, The battery is removable, The price is very cheap & affordable, The design is good and attractive.

Samsung Galaxy J2 does not contain Java, The connectivity lacks dual-band Wi-Fi, It offers 2000 mAh that is a little bit for avid gamers, It presents a camera that is not suitable in low lighting condition, The primary camera performance is just average compared with competitors and it is not up to mark.

Samsung Galaxy J2 offers a front camera that is pathetic when you take selfies with it and it needs to be improved, The screen resolution does not like other budget smartphones & It is average, it has only 540×960 pixels with 234 ppi (pixels per inch).

Samsung Galaxy J2 presents a small display size, It does not have an Infrared sensor that is a useful tool for controlling home electronics appliances, It is still made of plastic, It presents only 1GB of RAM and it does not have an NFC feature.