Robots can help humans complete myriad tasks, From robot surgeons to AI construction teams, Robots can keep animals healthy & safe, Robots can be used for observing wildlife, there are advanced cameras used for this purpose, Robots & sensors can enhance the selection of images captured & stored as well as the response of remote systems to live imaging needs, Tele-operated & automated equipment can increase the observation potential while at the same time avoids the disturbance of human presence.

Robots can monitor & track wildlife, Robots offer an opportunity for observation & camouflage. they are designed based on reduced visual clarity and help them camouflage in the open environment, so, the robots can observe the animals continuously.

Robots can be used to safeguard humans and animals, Robots can protect workers from cows that weigh more than 1,000 pounds, Robots can improve animal welfare by reducing stress caused by human contact too. Cargill recently developed a robotic cattle driver to move cows instead of relying on humans to do it, The machine mimics the arm-waving movements people use to herd cattle, and it allows the operators to talk to the creatures to encourage them to move.

Robots don’t often hurt humans, They are safe to use in workplaces and save humans from engaging in risky work, But the smartest robots could fail if companies don’t learn how to use them safely and pass on that knowledge to employees. Robotics in the workplace increase safety but pose new hazards. 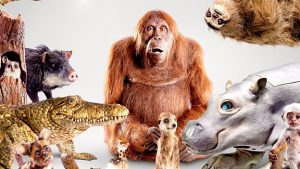 Realistic robotic animals can be used to fool people that are hunting illegally, The decoys are remotely controlled and equipped with video cameras, They are deployed in places where officials have been tipped off about illegal hunting and the information can be used to identify the poachers. Robot decoys do more than help us, they record animals in their natural environment, giving us more information on their lives and how they survive, They work to save the species they represent.

Robot decoys are made by suppliers who craft them from legally acquired animal hides so that they appear more realistic. Robot animals can help to preserve & protect the creatures, they are built to imitate, Poaching is a big problem for the safety of animals if the species is at risk, so these models are very useful to those who strive to conserve wildlife.

Robots for wildlife can be used in the natural habitat of the species they are modeled after, Equipped with video cameras and audio recorders, these robots can gather key information about the way animals behave, This is useful with groups of creatures who are hard for humans to track, observe & protect. Robot animals are in high demand by Wildlife Law Enforcement officers and can cost a few thousand U.S. dollars.

Reviewing the audio & footage from these robot animal spies, researchers can uncover unknown facts about creatures that are not frequently seen or heard about, more information that will help protect elusive animals from poaching, disease and extinction can be safely gathered, So, animal robots do not only act as decoys, they can also be educational spies for wildlife conservation.

The boulder cam is a camera disguised as a lump of rock, the developers made complex robots that moved around and, mimicked the movements and behaviors of the animals they interact with. The first robot, a meerkat, took three months to develop, while the walking crocodile took almost a year to build, This is a great series for families who want to see how nature and robots can work together.

Zoo animals are not allowed to be exposed to constant human noise, Infrared sensors take photos of the animals located under the heat lamps, so caretakers can manually check that the lamps are turning off and on, so, and more room in the budget for the zoo to take care of them.

The RoboSnail can work to keep an aquarium clean, This robot is a fully-automated glass cleaner that prevents algae from building up on the glass, With the RoboSnail, fish parents don’t have to worry about manually cleaning the tank, which can get grimy over time. This robot travels around the tank and keeps it clean without disturbing the fish residents. MOAI is a robot tool that cleans your tank while taking photos and automatically sending them to your phone.

Robotic cameras can be used for wildlife observation, The robot can learn its own ego-noise in real-time and enable characterization & compensation of a number of terrain types, The robot can use and recognize shadows as discreet vantage points. The integration of biomimetic robots in a fish school allows researchers to understand the group behaviour of fish and how they react in large groups.

An undulating fin has been designed inspired by knife fish to produce a propulsive force. You can adjust and direct the propulsive force for the fish robot manoeuvre using a mechanical system having two servomotors. The wireless control system helps these servomotors control the depth & direction of swimming.

Pet robots do not depend on the business, you need to have people who can take care of your pet when you travel, when you are not at home, or you might need to give up on your plan. But if you have a robot pet, those worries are no longer necessary, you do not get influenced your plans and life by pets, you do not have to sacrifice anything for pets.

Petcube is a robot cam, it allows pet parents to interact with their dogs and cats when they’re away from home, People can watch their pets using a camera and record moments to share with friends, They can talk to their pets through the cube and toss treats to them, This keeps humans closer to their pets when they’re far away.

Pet robots don’t have to worry about taking them for a walk, You do not have to spend time to clean up after your pet robots, Robots make it easier to track your pet if they get away from you or wander away from home, Whistle is a tool that you attach to your pet’s collar so you can track their GPS location and know precisely where they are. Owners can also track their pets motion over the past 24 hours to see where they went.

When people handle or treat pet robots not right, it will be a disadvantage that a pet robot can be broken down. because pet robots are machines, it is hard to repair robots, so, the relationship with robot pets can be finished easily. When you have bought something that you expected to use it for a long time, but it is broken quicker than you thought.