It is very important to stay connected while you fly, Some flights allow the passengers to make voice calls using mobile wireless devices, So, you can register in advance or simply launch your Web browser while you’re in flight, you will be able to browse the Web, catch up on emails & access corporate VPNs on your Wi-Fi-enabled laptop or mobile device.

Inflight Wi-Fi allows the passengers to send email , check Facebook & do basic browsing , as well as watch instant Videos , The planes connect to these signals by integrated antennas located under the wing & the connection is forwarded through the Wi-Fi router located within the cabin , allowing the passengers to get online .

The other method uses the communications satellites , The advantage of satellite-based in-flight Wi-Fi is that it offers increased reliability , coverage & speeds , It comes at a high cost because the satellite Internet is very expensive , but the travelers can send work messages & catch up on the latest news while flying .

There are many risks when you use someone’s internet , especially wireless internet offered by airlines , There are a lot of people travel for business & there could be some serious security risks in doing so , When you accept that & adjust your behavior ( by employing anti-surveillance countermeasures ) , you will be better protected from it . 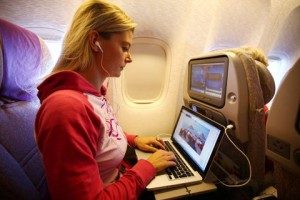 Inflight Wi-Fi can be a divisive subject , Many passengers have an enforced time out for reading or watching movies , they wouldn’t bother to view at home , Number of people who took advantage of Wi-Fi during the trial was extremely low , Relatively small download limits ( between 9 MB and 35 MB , a movie is about 800MB ) , The service may be offered mainly on overnight flights , The people preferred to sleep than surf the web .

The people who fly for work have a lot of time on their plates , The ability to have access to all the contacts & information is precious , more than 30 % of the people are either anxious or outright afraid of flying , Having access to e-mail & Facebook page can help calm shattered nerves .

Mobile connectivity would be good news for passengers , Whether they use onboard Wi-Fi or their own mobile devices , The passengers should be able to remain connected , The use of cell phones onboard masks the fact that the general public is specifically with the potential introduction of voice calls , There are many systems on the aircraft that allow for the voice component to be turned off , if the airline wishes .

Some Airways provides an example of a carrier that allows the passengers to use their cell phones to send SMS or MMS messages , and to browse the Internet & check emails , without allowing them to make calls , On the other hand , on some of its flights , some Airways allows the passengers to use their phones just as they would on the ground , including making voice calls .

Many concerns around allowing the voice calls in-flight are found , and for many passengers , but being able to access SMS messages , emails & the Internet via their handset could be a huge bonus , You will see many entertainment options on more planes , It is much cheaper to roll out in-flight streaming when you don’t need to supply secure tablets , Launching entertainment on the tablet is not tricky .

Many planes offer internet access for a small fee , Some airlines has Wi-Fi across their entire fleet while the others only on certain types of the planes & flights , When you want to find out if you can stay connected during your flight , It is very easy to monitor the wireless traffic , It will be effortless to compromise any number of the wireless users connected .

If you are an efficient business traveler ,  your productivity on the plane will improve if you are able to call the office , the clients or the prospects while flying , The downside of being strapped in the seat for hours , forced to listen to the one-sided calls around you , Many of us spend a lot of time more than 10,000 feet above the ground & thanks to modern technology we can continue to be productive .

You spend a considerable amount of time flying & while it would be nice to sleep , watch movies , or hold the conversations with those seated around us , You often have to get work done , There are a few types of technology providing the internet access to those on the airplanes & the technology continues to advance to provide improved services .

Inflight Wi-Fi offers the ability to access the Internet by using satellite technology , which allows the service to work over oceans , Wi-Fi may no longer be just an option , Wi-Fi is viewed as an investment with a long-term payoff by major airlines , It will be assumed that traveling employees will be able to access the Internet .

Once all airlines are equipped with Internet connectivity , They will offer high-speed broadband , enabling them to sell & streaming the content , not just basic connection , Some Airlines is leading the charge on offering power outlets , so , the passengers using Internet for work or play won’t have to be anxious about running out of battery .

The cost of in-flight Wi-Fi has increased since its inception while connectivity speeds have gone down , it’s important to understand how this technology works , The bandwidth is supplied from ground-based towers that communicate with directional antennas mounted on the bottom of the aircraft .

This technology is the reason for your slow connection when it delivers as little as 9.8 megabits per second (Mbps) for the entire plane , not per person , The bandwidth helps you to send emails & browse the Web , but it won’t allow you to stream video .

Although the in-flight Internet providers have improved the service & speeds with high frequency satellites , they have had trouble keeping up with the number of the passengers accessing the service , when the technology was introduced , The smartphones , tablets, e-readers and laptops weren’t as prevalent on the planes .

As the number of devices has increased over the years & congested the bandwidth , the connection speeds have remained stagnant , So , some travelers are actively rooting for higher prices to make room for faster connection speeds , Higher speeds benefit business travelers , as they appreciate the ability to stay connected & complete work in-flight .

The leisure travelers reap benefits , too , since this new technology opens up the possibility for streaming video (for a price) , faster & improved in-flight Wi-Fi is a welcome amenity that makes travel much easier , but it is a boon for the airlines , too , There is improved communication , this increased bandwidth capacity would supply the additional real-time diagnostics & predicative maintenance to the airlines .

So , The mechanical problems for the enitre plane could be detected immediately , with a more connected aircraft , crash investigators can rely less on the black box — the primary tool used to understand the cause of aviation accidents , with improved bandwidth efficiency , Airlines might have been able to locate any Flight & understand the cause of its disappearance , even without the physical black box .

Some aircrafts do not allow the use of inflight internet service for voice communication or videoconferencing through the cell phone , Voice over Internet Protocol (VoIP) or any similar device or service is banned  , The airlines need to offer bigger & better services , like streaming movies straight to the smartphone device .

The satellite coverage may experience outages for the reasons such as the government regulations , weather and switching between the satellite regions , The travelers who were giddy about the possibility of connecting at 35,000 feet are increasingly frustrated by steep fees & slow connections and there is insecure payment gateway .

The phone calls are prohibited on some airplanes , as the electromagnetic interference has been the reason for prohibiting these calls on the planes , It is also why the laptops & the other devices need to be turned off during takeoff & landing , So , there are some missed connections .

The airplanes, on the other hand, use a number of radio frequencies for different tasks , If those wires are crossed while flying, the results may be more severe , Radio frequency is used to communicate with ground control , The air traffic control, the guidance & the weather detection, If the passenger’s phone is turned on , it could possibly garble the message between the pilot & others .

In-flight Wi-Fi isn’t as good as your blazing fast home fiber connection , The signals should be sent by either the base station on a satellite , to what amounts to a pressurized canister traveling at 370 miles per hour through the upper atmosphere , implementing these satellites & antennas takes time .

Many planes are fitted with multiple ATG receivers , So , the connections can be duplexed , thereby resulting in faster connections , But this still doesn’t approach the speed of what you might be used to at home or at work , You should also remember that you’re sharing the same Internet connection with hundreds of the other passengers .

Installing in-flight Wi-Fi equipment is expensive & relatively bad for the aerodynamics , The modus operandi of low-flight carriers is to offer the basic experience for price-sensitive consumers ,  Anything that increases the cost of tickets is to be avoided.

Corporate Espionage is a big problem , Knowing about the current company crisis can be valuable to your competitors , access credentials to your customer databases would be the nightmare , Anyone can acquire such information in just a matter of seconds once he can gain access to your email or computer .

An attacker may hold your information hostage , demanding the ransom or will offer to sell it secretly to your competitors , Stalking  is another problem , your communications & uncover your destination can be monitored , your contacts & compromise your device giving them unfettered access to your data & whereabouts .

Spear Phishing is a great problem , It’s amazing how much information people transmit automatically about themselves , Anyone can identify a high-value target & gather the information about hem , He can deliver a specific & tailored phishing attack , Your devices & websites that you use give the attackers a lot of valuable information .

There is malware distribution  , Everyone is going to try to visit Google , Facebook , YouTube or the other high-volume websites , You could as easily embed the script that loads on your target’s machines , This malware could spawn the rootkit , ultimately joining the botnet .

Spam is a big problem & you’ll need to reset all your security credentials , There are insecure communications , The people are curious about your data , Anything that might be of no value to you , could be valuable to them , updating your blog seems innocent enough , but to an attacker , it’s a goldmine of traffic & user information and Checking your company’s email .

The attacker can compromise your communications & computer and he can issue a national security threat through your machine , And this distraction may delay law enforcement from actually identifying the attacker .

in-flight Wi-Fi isn’t cheap , It is ludicrously expensive , The users can expect to spend a lot of money & get very little Internet in return , A lot of sites are restricted when using in-flight Wi-Fi , Your home Internet connection allows you to access whatever content you want , So long as your subscription has enough data , you can watch or visit practically anything.

The airline Wi-Fi providers are faced with limited bandwidth & have to preserve it for the other users on the aircraft, They pose tight limits on what the users can do and access from their connections, Streaming the services are generally a no-go, Some airlines even block the teen-favorite social networks .