Classification of ecosystem and Environmental balance

The components of ecosystem : Any ecosystem consists of two main components which are living organisms such as plants , fungi , algae and animals , non-living things such as air , soil and water , Ecosystems may be classified according to their sizes into :

There are many relationships between the components of the ecosystem as :

When the relationships ( interactions ) among the components of the ecosystem are stable ( balanced ) , an environmental balance is occurred . 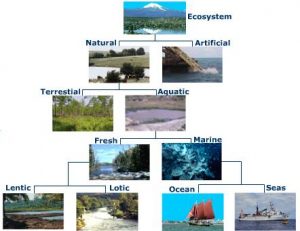 Natural changes : Change in the natural conditions ( circumstances ) in ecosystem causes a disturbance that leads to disappearance of some organisms , appearance of other organisms , environmental imbalance that may take a short or a long period of time until a new balance occurs in this environment .

Examples : In ancient eras , change in the natural conditions of the environment leads to the disappearance of dinosaurs causing their extinction .

Examples : Cutting down trees as the green plants ( trees ) are the main source of food and oxygen for all living organisms .

Factors that keep the environmental balance

Some food relationships help in keeping the environmental balance such as Predation , Saprophytism .

First : The effect of predation on keeping the environmental balance

Predation organizes the numbers of preys’ population , where predators help preys to get rid of weak or sick members and let the strong ones reproduce adding strong members to population .

If there were no predators in ecosystem , the environmental balance will be disturbed as number of preys will increase to an extent that the available food resources become insufficient ( not enough ) for preys , Competition appears among prey’s population , so , preys will die , because they have not shelter and become weak and feeble ( infected with diseases ) which lead to their death .

When rabbits are introduced into an island that has a suitable environment with much food and no natural enemies , The number of rabbits will increase and competition appears among them to get food , so they will die causing an environmental imbalance .

Second : The effect of saprophytism ( saprophytic organism ) on keeping the environment balance

Man can benefit from saprophytic organisms in many industries such as :