The respiratory system allows to you inhale and exhale, it allows you to talk and to smell, It brings air to body temperature and moisturizes it to the humidity level your body needs, It delivers oxygen to the body cells, It removes waste gases, including carbon dioxide, from the body when you exhale, It protects your airways from harmful substances and irritants.

Development of the respiratory system

When the embryo is approximately 4 weeks old, the respiratory diverticulum (lung bud) appears as an outgrowth from the ventral wall of the foregut. The endoderm of the foregut will give rise to the epithelium of the internal lining of the larynx, trachea, and bronchi, as well as that of the lungs. Splanchnic mesoderm will give rise to the cartilaginous, muscular, and connective tissue components of the trachea and lungs.

The blind caudal end of the trachea will dilate and give lung bud which will divide into right and left buds. 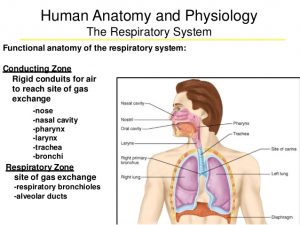 Histology of the respiratory system

Most of the nasal cavity, the paranasal sinuses, the nasopharynx, the larynx, the trachea, and bronchi are lined by respiratory mucosa which is characterized by:

Mucus provided by goblet cells and by the mixed muco-serous glands in the lamina propria forms a mucous blanket that is propelled by the ciliary action towards the pharynx where trapped dust particles are swallowed instead of being inhaled. The lamina propria contains plasma cells, mast cells, and lymphoid nodules that provide an immunological protective function.

It is a specialized region of the nasal mucosa for the sense of smell, located at the roof of the nasal cavity. It is formed of non-ciliated pseudostratified columnar epithelium without goblet cells. The epithelium consists of 3 kinds of cells:

Larynx is a short passage for air between the pharynx and the trachea. It is kept open by the cartilages present in its wall. Two pairs of mucosal folds project inwards from the wall; the upper is the vestibular folds (false vocal cords) while the lower is the vocal cords.

The core of the vocal cords has no glands and is made up of elastic fibers and striated muscle fibers (vocalis muscle) arranged in parallel bundles. The anterior (lingual) surface of the epiglottis and the vocal cords are covered with non-keratinized stratified squamous epithelium. The rest of the larynx is lined by respiratory mucosa.

Trachea is a flexible tube continuous with the larynx above and bifurcates at its lower end into two main extrapulmonary bronchi. The wall of the trachea has the following histological structure:

The trachea is lined by respiratory mucosa, composed of:

a- Tracheal epithelium: formed of 5 types of cells:

b- The lamina propria: loose connective tissue contains lymphoid nodules. The elastic fibers are condensed to form an elastic membrane separating the lamina propria from the submucosa.

It is similar to the lamina propria with mixed mucoserous submucosal glands. Their ducts extend through the elastic lamina to open onto the surface of the mucosa.

The tracheal wall is reinforced by 16-20 C-shaped rings of hyaline cartilage. The rings are separated by fibro-elastic connective tissue to prevent over-distension of the tracheal lumen. The posterior wall of the trachea, anterior to the esophagus contains a band of transversely arranged smooth muscle fibers (trachealis muscle) that connects the two ends of the C-shaped cartilaginous rings.

It is the outer layer, formed of fibro-elastic connective tissue that binds the trachea to the adjacent structures. It contains the large blood vessels and nerves that supply the tracheal wall.

Smooth muscle fibers are spirally arranged encircling the entire lumen beneath the mucosa.

It contains mixed mucoserous glands that lie external to the muscle layer.

It is formed of discontinuous plates of hyaline cartilage encircling the bronchial lumen. They lie external to the muscle layer where they are separated by the glands of the submucosa.

Formed of fibro-elastic connective tissue that is continuous with that of the adjacent structures such as the pulmonary vessels.

As the bronchi become smaller, the smooth muscles and elastic fibers become relatively more abundant while cartilage and other connective tissue are reduced. Branches of the bronchial tree that enter the lung lobules are the bronchioles, they measure 1mm or less in diameter.

Larger bronchioles branch repeatedly, giving rise to the smaller terminal bronchioles (less the 0.5mm in diameter), these are the last parts of the air conducting portion that finally gives rise to the respiratory bronchioles. The bronchiole has the following histological structure:

It is thrown into prominent longitudinal folds due to contraction of the smooth muscle fibers during fixation of the histological specimen.

It is formed of prominent circularly arranged smooth muscle fibers and a network of elastic fibers.

It is formed of a thin layer of connective tissue rich in elastic fibers, binding the bronchiole to the surrounding lung parenchyma. Bronchioles have no cartilaginous plates, no lymphoid nodules, and no glands in their walls.