Carbohydrates provide your body with energy. Most carbohydrates are digested and broken down into glucose before entering the bloodstream. Cells can convert carbohydrates into the fuel molecule ATP through a process called cellular respiration. Most cells in the body can produce ATP from several sources, including dietary carbohydrates and fats.

They are organic substances composed of carbon, hydrogen, and oxygen. There are three main types of carbohydrates: starches, fiber, and sugars. Starches are referred to as complex carbohydrates. They are found in grains legumes and starchy vegetables like potatoes and corn. Sugars are known as simple carbohydrates. There are natural sugars in vegetables, fruits, milk, and honey. Added sugars are found in processed foods, syrups, sugary drinks, and sweets. 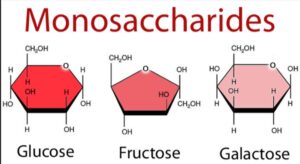 1- Monosaccharides are classified according to the number of carbon atoms: Trioses, tetroses, pentoses, hexoses & heptoses.

2- According to the characteristic carbonyl group (aldehyde or ketone group):

An asymmetric carbon atom is a carbon atom attached to four different atoms or groups. Any compound having asymmetric carbon(s) will possess isomers. Isomers are compounds that have the same molecular weight, same percentage composition, and differ in their physical and chemical properties.

They are two isomers; one of them is the mirror image of the other e.g. D and L glyceraldehydes & D and L glucose. Most of the monosaccharides occurring in mammals are of the D configuration.

Two monosaccharides have the same molecular formulae but differ in their functional groups, since one has an aldehyde group and the other has a ketone group, glucose and fructose are examples of this type of isomerism.

α and β – anomers are the isomers of monosaccharides that differ from each other only in the configuration about the anomeric carbon.

2- Sugar alcohols: These are reduction products of monosaccharides. e.g. ribose gives ribitol, glucose gives sorbitol, mannose gives mannitol, and galactose gives galactitol, while fructose gives rise to either sorbitol or mannitol. Besides those sugar alcohols (itols), myoinositol is a cyclic sugar alcohol that occurs in nature and is the important information of phosphatidylinositol.

3- Deoxysugars: In deoxysugars, a hydroxyl group has been replaced by a hydrogen atom, the most abundant naturally occurring deoxyribose are: 2-deoxyribose, a constituent of DNA.

4- Aminosugars: They are monosaccharides in which the hydroxyl group at carbon 2 is replaced by an amino group (NH2) which may be acetylated, e.g. D-glucosamine, D-galactosamine.

6- Glycosides: Glycosides are compounds formed from condensation between:

Disaccharides have two monosaccharides, the same or different, linked by glycosidic linkage e.g.:

Chemistry: D-glucose and β-D galactose, in pyranose form, linked by β -1,4-galactosidic linkage.
Sources: It is only found in milk.