The autonomic fibers are classified into:

Acetylcholine acts as a chemical transmitter in the following sites: 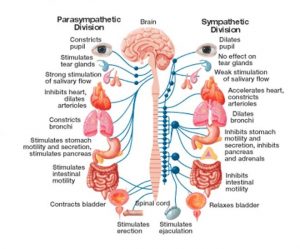 These receptors are activated by muscarine and acetylcholine. Muscarinic Ach receptors can be either excitatory or inhibitory. They are found in the following sites:

The transmitters in the sympathetic nervous system are catecholamine, chiefly norepinephrine (noradrenaline) and epinephrine (adrenaline).

The neurotransmitter noradrenaline is released from the postganglionic sympathetic neurons except those supplying sweat glands and the blood vessels of the skeletal muscle. It is also released from the adrenal medulla into the bloodstream.

These are receptors responding to noradrenaline and adrenaline. They are divided into 2 types: Alpha-receptors (α) and Beta-receptors (β).

They are mainly excitatory e.g. they mediate vasoconstriction, contraction of the spleen, erection of hair … etc. However, there are exceptions e.g. they are inhibitory to intestinal muscles (relaxation).

Beta-adrenergic receptors are responding to adrenaline. They are subdivided into 2 types: beta 1 and beta 2.

Actions of noradrenaline and adrenaline

Noradrenaline excites mainly alpha-receptors but excites the beta-receptors to a slight extent as well. Thus, noradrenaline secreted by the adrenal medulla has the same effects on the different organs such as the one secreted from nerve endings, except that its action lasts for a longer time because it is slowly removed from the blood.

Difference between noradrenaline and adrenaline

Adrenaline causes almost the same effects as those caused by noradrenaline, but the effects differ in the following respects:

Adrenaline and noradrenaline are almost always released by the adrenal medullae at the same time that the different organs are stimulated directly by generalized sympathetic activation.

Therefore, the organs are actually stimulated in two different ways simultaneously, directly by the sympathetic nerves and indirectly by the medullary hormones.

The two means of stimulation support each other. For instance, the total loss of the two adrenal medullae usually has little effect on the action of the sympathetic nervous system because the direct pathways can still perform almost all the necessary duties.

The autonomic nervous system is activated mainly by centers located in the spinal cord, brain stem, and hypothalamus. Also, portions of the cerebral cortex, especially of the limbic system (responsible for emotions), can transmit impulses to the lower centers and in this way influence autonomic control.

Simple autonomic reflexes such as (micturition and defection) are integrated in the spinal cord, e.g.: Stretching of the full urinary bladder sends impulses to the sacral cord, and this, in turn, causes contraction of the bladder as well as relaxation of the urinary sphincter, thereby promoting micturition.

Many areas in the reticular substance of the medulla, pons, and midbrain, as well as many special nuclei, control different autonomic functions; such as arterial blood pressure, respiration, heart rate, glandular secretion in the gastrointestinal tract, and many others.

The higher areas of the brain can alter functions of the whole autonomic nervous system or portion of it, strongly enough to cause severe autonomic induced disease such as peptic ulcer, constipation or diarrhea, heart palpitation, hypertension, what is known as psychosomatic effects.