Types of movement in living organisms

Conditions of movement and keeping the balance in living organisms

The skeleton may be:

The types of movement differ in the plant according to the type of stimuli, including: 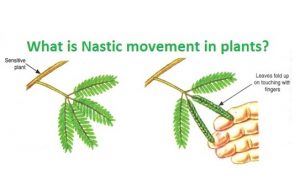 When the leaflets of Mimosa plant are touched, they collapse in a successive order and followed by the petioles, as if they wilt.

As in all plants, where the different parts of the plant respond to different stimuli such as light, humidity & gravity.

Pulling movement in the tendrils of climbing plants (as in peas)

It occurs by the tendrils and needs solid support (object), where:

Pulling movement in roots of corms and bulbs

Importance of this movement: The subterranean storing stem (corm or bulb) always remains at a suitable distance from the soil surface by the help of these pulling roots which increases its support and protects its aerial parts against the effect of the wind.

One of the main characteristics of the living cytoplasm is its continuous rotation inside the cell, This movement is shown when examining Elodea leaf cells (aquatic plant) under the high power of the microscope, where we can observe the following:

Sensitivity in plants (Tropism types, response to touch and darkness)