They are biological macromolecules ( polymers ) made up of many smaller molecules ( monomers ) called nucleotides , Nucleic acids are composed of hydrogen , oxygen , nitrogen , carbon and phosphorus atoms .

Nucleic acids are made up of building units which are the nucleotides that bind together by covalent bounds to form the polynucleotide ( the nucleic acid ).

A nitrogenous base is connected to the carbon atom no.1 of the sugar molecule, There are five types of nitrogenous bases, which are Adenine ( A), Guanine ( G), Uracil ( U ), Cytosine ( C ) and Thymine ( T), Uracil is found in RNA only instead of thymine in DNA , Nucleic acids differ according to the difference of the type of sugar and nitrogenous bases forming them . 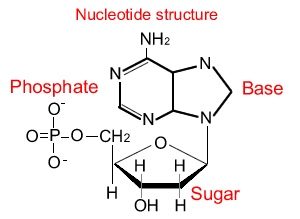 The type of pentose sugar in the nucleotide is Deoxyribose sugar ( which lacks an oxygen atom than ribose sugar ), Nitrogenous bases are Adenine ( A ) , Guanine ( G ) , Thymine ( T ) and Cytosine ( C ), Number of strands in each molecule is two strands of nucleotides .

Location: Inside the nucleus of the cell where it is involved in the structure of chromosomes .

It carries the genetic information passing from a generation to another when the cells divide and these information are responsible for appearing the distinctive characteristics of the living organisms and organizing all vital activities of the cells .

The type of pentose sugar in the nucleotide is Ribose sugar, Nitrogenous bases are Adenine ( A ) , Guanine ( G ) , Uracil ( U ) and Cytosine ( C ), Number of strands in each molecule is single strand of nucleotides, It is transcribed ( formed ) from the nucleic acid DNA inside the cell nucleus then transferred into the cytoplasm surrounding the nucleus .

Building ( synthesizing ) proteins which the cell needs, These proteins are responsible for appearing the genetic traits and organizing the vital activities .