CO₂ is not only a waste product of metabolism but it is also an important component of the carbonic/bicarbonate buffering system in the body fluids which is involved in the adjustment of pH. The solubility of CO₂ in the blood is about 20 times that of O₂; therefore, considerably more CO₂ than O₂ is present in simple solution at equal partial pressures.

Carbon dioxide transport is transported in the blood in two forms:

About 5% of CO₂ is dissolved in the plasma and the RBCs. It is called free CO₂. It is very important because:-

It represents 95% of CO₂ content. It is present in two forms:

It is the volume of CO₂ that is added to each 100 ml of arterial blood during its flow through the tissues as a result of metabolism. It is normally about 4 ml 100m blood at rest. It equals the difference between the total amount of CO₂ in the arterial and the venous blood (52- 48 = 4 ml).

Transport of CO2 from tissues to lungs (Chloride Shift) 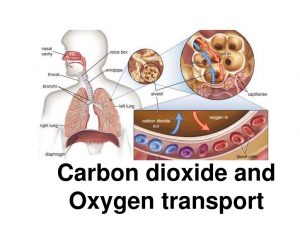 A- Changes at the tissues

When blood is exposed to high CO₂ at the tissue, CO₂ passes from the tissues to the plasma. The following reactions take place:

Deoxygenated Hb is less acidic than oxygenated Hb and is a better H+ acceptor. The release of O2 from oxyheamoglobin into active tissues gives more reduced Hb which accepts more H+ (H+ + Hb ↔ HHb−). This allows more CO₂ transport by blood. HHb is a very weak acid that almost does not disturb the pH.

Small amount of CO₂ inside RBCs reacts directly with the amine radicle of Hb forming carbamino hemoglobin. This combination of CO₂ with Hb is a reversible reaction that occurs with a loose bond, so that CO₂ is easily released into the alveoli where the PCO2 is lower than in the tissue capillaries.

B- Changes at the lungs

At the lungs, the reverse processes to those of the tissues take place. When venous blood (PCO2 = 46 mm Hg) reaches the lungs, it is exposed to a lower PCO2 in the alveoli (PCO2 = 40 mm Hg). CO2 diffuses to the alveoli. The physically dissolved CO2 decreases and H+ binds to HCO3− → H2CO2 → CO2 + H2O. Accordingly, HCO3− concentration in the RBCs decreases therefore, HCO3 diffuses from the plasma to RBCs and Cl− diffuses to the plasma (chloride is shifted out of RBCs).