Regulation of myocardial metabolism & effects of insulin on heart metabolism

The heart requires a high rate of energy expenditure to fuel the constant power output of the ventricles. Adenosine monophosphate (ATP), the energy currency of the cell, is broken down to adenosine diphosphate (ADP) and inorganic phosphate (Pi) to fuel both the contractile work of systole and the calcium uptake into the sarcoplasmic reticulum that allows for relaxation during diastole.

The concentration of ATP in the heart remains constant, even when the heart is stressed by exercise Thus, the high rate of ATP consumption is matched with a high rate of ATP resynthesis. ATP is resynthesized mainly in the mitochondria by oxidative phosphorylation, and to a much smaller extent by the glycolytic pathway.

Glucose and glycogen undergo glycolysis to form pyruvate, which is transported into the mitochondria and converted to acetyl CoA. The aerobic heart also takes up lactate from the blood and converts it to pyruvate. The rate of these metabolic pathways is tightly coupled to the rate of contractile work. 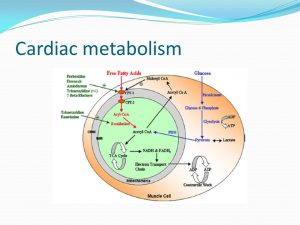 Conversely, contractile work is also linked to the supply of oxygen and the rate of flux of the electron transport chain, and the resynthesis of ATP in the mitochondria. The regulation of myocardial metabolism is complex in that it is linked to arterial substrates and hormone levels in addition to coronary flow, inotropic state, and nutritional status of the tissue.

In the well-perfused human heart in the post-absorptive state, fatty acid accounts for 60-80% of the ATP synthesis in the heart, glucose for 10-30%, and lactate uptake for another 10-30% Ketone bodies (β-hydroxybutyrate and acetoacetate) can also be readily oxidized by the heart, however, the circulating levels are very low in nondiabetic individuals (< 0.2 mM), thus they are not normally a significant fuel.

Fatty acid oxidation in the heart

The rates of uptake and oxidation of fatty acids by the heart are primarily dependent on the concentration of fatty acids in the plasma. The arterial fatty acid concentration is mainly determined by the rate of triacylglyceride breakdown (lipolysis) in subcutaneous fat stores, lipolysis is under light hormonal regulation: it is strongly inhibited by insulin and stimulated by norepinephrine and epinephrine.

Thus, conditions like starvation and diabetes result in greater fatty acid uptake caused simply by lower insulin, higher catecholamines, and greater fatty acid release from fat stores. Once the fatty acids are transported into the cell, it is converted to fatty acyl CoA, and either oxidized in the mitochondria or stored as intracellular triacylglycerol.

Fatty acyl CoA is shuttled into the mitochondria by the way of the carnitine shuttle system. High plasma free fatty acid concentrations exert a mass action effect on this pathway and result in elevated rates of fatty acid uptake and oxidation in the mitochondria.

There are three primary sources for carbohydrate fuel for the myocardium;

The uptake of extracellular glucose is regulated by transmembrane glucose gradient and the concentration of glucose transporters in the membrane Two isoforms from the glucose transporter family have been identified in the myocardium-GLUT 1 and GLUT4- with GLUT4 being predominant.

They are both located in the sarcolemmal membrane and in intracellular microsomal vesicles Insulin, ischemia, and increased work demand each result in the movement of GLUT1 and GLUT4 from their intracellular site into the plasma membrane, resulting in an increase in the membrane capacitance for glucose transport.

The glucose gradient from outside to inside the cell is also an important factor for transporting glucose into the cell, Upon entering the cell, free glucose is rapidly phosphorylated by hexokinase to form glucose-6-phosphate, thus rendering glucose impermeable to the cell membrane. Both glucose and lactate are converted to pyruvate. Pyruvate is transported to the mitochondria and further oxidized to CO₂ in the citric acid cycle.

The rate of carbohydrate (pyruvate and lactate) oxidation by the heart is inversely related to plasma-free fatty acid concentration. The biochemical mechanisms for this elegant interrelationship are referred to as the glucose-fatty acid cycle or the Randle cycle. High rates of fatty acid oxidation inhibit the uptake and oxidation of glucose and lactate

Effects of insulin on heart metabolism

Insulin causes the heart to take up and oxidize more glucose and lactate through direct and indirect mechanisms: