The liver removes toxins from the body’s blood supply, It maintains healthy blood sugar levels, It regulates blood clotting, and performs hundreds of other vital functions, It is located beneath the rib cage in the right upper abdomen, It filters all of the blood in the body and breaks down poisonous substances, such as alcohol and drugs, It produces bile that helps digest fats and carries away waste.

The liver lies under the diaphragm, in the right hypochondrium, epigastrium, and left hypochondrium. It is wedge-shaped, so it has five surfaces: superior, inferior, anterior, posterior, and right surfaces.

Lobes of the liver

It is divided into right large and small left lobes by: 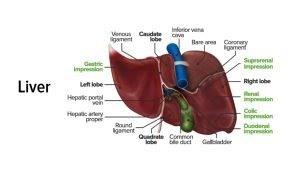 Relations of the liver

The diaphragm and base of the right lung and pleura are related to the superior, anterior, and right surfaces.

Bare area of the liver: It is a triangular area related directly to the diaphragm (not covered by peritoneum), its base is formed by the groove for IVC, its apex is formed by the right triangular ligament, its superior and inferior boundaries are the two layers of the coronary ligament.

5- Inferior (Visceral) surface: it shows the following features and impressions:

It is a rectangular part of the inferior surface of the liver. It is bounded by:

It is related to the transverse colon (anteriorly), pylorus, and 1st part of the duodenum (middle) and lesser omentum (posteriorly).

The lower and left part of the caudate lobe forms a projection called the papillary process, It is related posteriorly to the diaphragm, descending thoracic aorta, and T. 12.

It forms the hilum of the liver. Anteriorly it is bounded by the quadrate lobe and posteriorly by the caudate lobe and process, It gives attachment to the lesser omentum, Structures passing through it:

Areas of the liver not covered by peritoneum

It depends on the vascular distribution to the liver (according to the venous drainage by the hepatic veins), It is divided into right and left lobes by an imaginary line passing through the IVC and the fossa of the gall bladder, This includes caudate and quadrate lobes as parts of the left lobe.

It consists of the gall bladder and the biliary ducts.

It is 3 inches long, Its course is divided into 3 parts: