The pancreas is located inside the abdomen, just behind your stomach, It is about the size of your hand, the pancreas helps the digestive system by making hormones, It has exocrine glands that produce enzymes important to digestion, These enzymes include trypsin & chymotrypsin to digest proteins; amylase for the digestion of carbohydrates; and lipase to break down fats.

The pancreas is one of the largest accessory glands of the digestive tube. It lies in the abdominal cavity occupying the duodenal cap. The secretory parenchyma is peculiar in that it is composed of both endocrine and exocrine parts and therefore it is classified as a mixed gland.

The endocrine parenchyma of the pancreas (The islets of Langerhans)

The islets of Langerhans are generally more numerous in the tail region than in the head and body of the pancreas.

Histological structure of islets of Langerhans

A. The stroma: islets appear in routine histological sections, as lightly-stained areas of variable sizes between the pancreatic acini. They are not encapsulated but supported by delicate reticular fibers. 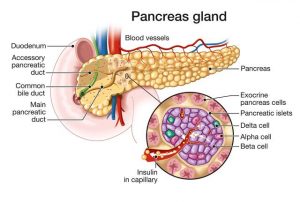 B. The parenchyma: The cells of the islets are polygonal, arranged in short cords, and separated by a rich network of fenestrated capillaries. By histochemical and immunohistochemical staining of sections of the pancreas, at least 3 main types of cells in pancreatic islets can be identified. They include:

These cells are larger but less numerous than the B cells (20%). They usually occupy the periphery of the islet. By EM, their secretory granules are numerous and have a homogeneous dense core. Function: secretion of glucagon hormone.

They are small cells constituting the majority (70%) of the islet cells. They usually occupy the central zone of the islet. By EM, their secretory granules have a characteristic polyhedral crystalline dense core surrounded by a wide electron-lucent halo.

They constitute about 5-10% of the islet cells. They are, like the A cells, peripherally located in the islet. Function: secretion of somatostatin hormone.

Insulin has no plasma carrier protein, thus its plasma half-life is less than 3-5 minutes, The major organs involved in insulin metabolism are the liver, kidneys, and placenta, About 50% of insulin is removed in a single pass through the liver.

The first involves an insulin-specific protease found in many tissues especially the liver, and kidneys, thus the insulin molecule could be cleaved proteolytically between amino acid residues 16 and 17 of the B chain.

The second mechanism involves hepatic glutathione-insulin transhydrogenase. This enzyme reduces the disulfide bonds, and then the individual A and B chains are rapidly degraded.

The insulin receptor is a glycoprotein. It has 2 identical α chains and two transmembrane β subunits linked together (α2β2) by disulfide bonds. The α chains contain the insulin binding domain, β chains have tyrosine kinase domain and an autophorylations site. The phosphorylated receptor next phosphorylates insulin receptor substrates (IRS). IRS1 is involved in the cell growth effects of insulin (slow action of insulin).

Activation of IRS1 activates several proteins, a pathway that ends by activation of MAP kinase (mitogen-activated protein kinase) which stimulates cell growth and DNA synthesis. IRS2 is involved in the metabolic effects of insulin (rapid action of insulin). The phosphorylated IRS2 binds to a variety of proteins:

One of these proteins is Pl-3 kinase links activated insulin receptors to a Protein 70 kinase. This pathway is involved in translocation of glucose transporter from Golgi apparatus to the cell membrane to bind glucose, enzyme activities (dephosphorylation and activation of glycogen synthase) and regulation of genes involved in metabolism e.g, increase of glucokinase synthesis and inhibition of PEPCK synthesis.

a) Effect of insulin on carbohydrate metabolism

b) Effect of insulin on fat metabolism

d) Effect of insulin on growth

Insulin has a synergistic effect with growth hormone, Each promotes cellular uptake of a different selection of amino acids, all of which are required for growth.

e) Effect of insulin on potassium

It causes K+ to enter muscle cells. The reason is that insulin increases the activity of Na+– K+  ATPase in the cell membrane, so more potassium ion is pumped into ceil.

PI-3kinase (phosphatidyl inositol- 3kinase) is a protein containing 2 subunits: one unit interacts with activated insulin receptor substrates, the other subunit phosphorylates (activates) other proteins like P70 kinase and mediates the different metabolic functions of insulin.