The thyroid gland secretes many hormones, collectively called thyroid hormones, The thyroid gland consists of two lobes, the right & the left lobes joined together by an intermediate structure, the isthmus, It is located in the anterior part of the lower neck, below the larynx (voice box), It secretes hormones vital to metabolism & growth.

It is covered by a double capsule, the outer is the pretracheal gland fascia, and the Inner is the true CT capsule of the gland. The capsule sends fibrous septa dividing the gland into incomplete lobes and lobules. The stroma carries the blood vessels, nerves, and lymphatics of the gland. Reticular fibers extend from the septa and form a network supporting the thyroid parenchyma.

Secretion of thyroid hormones (T3 and T4), The thyroid gland is the only endocrine gland that stores big quantities of its hormones in an inactive form extracellularly in the follicular lumen as a colloid. 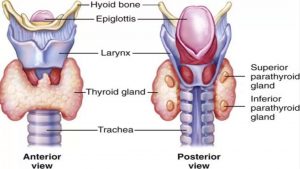 Steps of synthesis and secretion of T3 and T4

They have a widespread effect because it stimulates oxygen consumption (calorigenic action).

Thyroid hormone does not have any discrete target organs, It affects almost every tissue in the body as it stimulates oxygen consumption (calorigenic action).

They increase the metabolic rate and oxygen consumption of almost all tissues of the body. The basal metabolic rate can increase to as much as 60 to 100% above normal when large quantities of the hormones are secreted.

2- They increase the synthesis of many Intracellular enzymes and increase their activity as Na+ K+-ATPase which increases the rate of transport of both sodium and potassium through the cell membrane. This process utilizes energy and increases heat production i.e. increases metabolic rate.

3- On mitochondria: They increase the size, number, and activity of mitochondria, and this, in turn, Increases the rate of formation of ATP to energize cellular function.

7- Thyroid hormones are necessary for the hepatic conversion of carotene vitamin A.

B) On growth and development

Thyroid hormone increases respiration due to an increased rate of metabolism which increases the utilization of oxygen and the formation of carbon dioxide. Also, it helps dissociation of O2 from heamoglobin by increasing the amount of 2.3  diphosphoglyceride (DPG) in the RBCs.

They increase the rate of secretion of the digestive juice and motility. This leads to increase appetite and food intake.

For a normal sexual function to act thyroid hormone secretion needs to be approximately normal. Thyroid hormones are essential for normal menstrual cycles and fertility. They increase milk secretion in lactating women.