Genetics is the science of heredity. The unit of heredity is the gene, which is a segment of DNA that carries in its nucleotide sequence information for a specific biochemical or physiologic property. Most bacterial genes are carried on the bacterial chromosome, these genes are essential for bacterial growth.

In bacteria, it consists of a single supercoiled, circular double-stranded helix of DNA.

These are extrachromosomal small circular double-stranded helical DNA molecules, that do not code for essential functions for the survival of the bacteria. Plasmids may exist as a separate replicon (capable of replicating themselves independent of the bacterial chromosome) or integrated into the chromosome where they are called episomes. Plasmids can code for one or more of the following:

Some plasmids in Gram-negative bacteria carry genes for self-transfer and are so-called transmissible or conjugative plasmids. They code for the production of sex pilus needed for direct contact between donor and recipient cells followed by the transfer of a copy of the plasmid to the recipient cell. These plasmids are therefore called fertility (F plasmids) of sex plasmids. 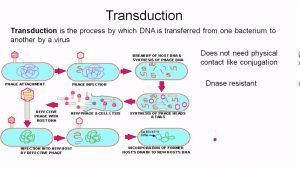 These are genetic units that are capable of mediating their own transfer from one location to another on the same bacterial genome or between the genome and plasmid of the same cell, This transposition relies on their ability to synthesize their own site-specific recombination enzymes called transposases.

Transposons are examples of transposable elements that code for antibiotic resistance. Transposable elements cannot exist as separate replicons i.e. they are not capable of replicating themselves independent of bacterial chromosomes. Variation is an observable change within a species. It could be:

The mutation is an alteration in the nucleotide sequence at some point in the organism’s DNA. Mutation can occur spontaneously in nature, or may be induced by physical agents e.g. heat, UVR, and ionizing radiations, or by chemical agents (mutagens) e.g. Nitrous oxide and ethidium bromide.

It is a type of genetic transfer in which/bacteriophages Function as vectors to transfer DNA from donor to recipient bacteria by infection. It is of two types, generalized transduction, and restricted transduction.

It is the plasmid-mediated transfer of DNA from donor to recipient bacteria, through direct wall to wall contact, Donor cell must contain a conjugative plasmic (transmissible plasmid), also called sex Plasmid or fertility factor. This plasmid carries genes called transferase genes (tra genes) that mediate their DNA transfer by a process of cell conjugation. Some of these tra genes code for sex pilus production. A cell-carrying factor is called (F+cell).

Plasmid transfer in Gram-ve bacteria begins by extrusion of a sex pilus from (F+cell), a specialized fimbria, 1.2 mm long and its tip attaches to the surface of the recipient cell (F cell). The 2 cells become bound together at a point by direct wall-to-wall contact by retraction of the sex pilus, and then the plasmid undergoes a special type of replication called “replicative transfer.

A successful gene transfer between bacteria (whether transformation, transduction, or conjugation) must be followed by a recombination step which involves the integration of the transferred genetic element into the recipient DNA, thus maintaining its existence in the progeny of the recipient bacterium. Failure of this process results into an abortive genetic transfer, and the transferred DNA remains for a short period without replication and is diluted out.

Genetic Engineering is the direct manipulation of an organism’s genome using biotechnologyو This can be achieved by the use of two important tools: restriction enzymes and cloning vectors.

A- Cloning into a plasmid

B- Cloning into an avirulent virus