Motorola Moto G4 has IPS LCD capacitive touchscreen, 16M colors, Its  size is 5.5 inches (~71.2% screen-to-body ratio), and a resolution of 1080 x 1920 pixels (~401 ppi pixel density), It brings multiple touch feature, and it provides you with Corning Gorilla Glass 3 that helps to protect the screen.

Motorola Moto G4 gives you a secondary camera of 5 MP, f/2.2, auto-HDR, It offers a superb expandable memory via card slot microSD, It can be expanded to 128 GB (dedicated slot), It has a wonderful internal memory of 16/32 GB and it includes 2 GB RAM for-multitasking. 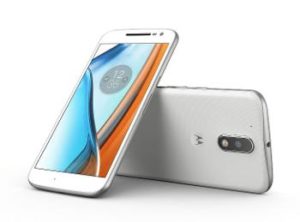 Motorola Moto G4 has FM radio, It provides you with micro USB v2.0, USB Host, It has sensors such as accelerometer & gyro, It has several types of messaging such as SMS (threaded view), MMS, Email, Push Email and IM.

Motorola Moto G4 gives you browser HTML5, It has got fast battery charging feature, It comes with an active noise cancellation using dedicated mic, and it supports extensions for audio such as MP3/AAC+/WAV/Flac player.

Motorola Moto G4 supports extensions for video such as MP4/H.264 player, It comes with a photo/video editor, It has a document viewer, it offers a non-removable Li-Ion 3000 mAh battery, and it comes with misc colors such as Black and White.

Motorola Moto G4 has got an affordable weight to carry of 155 gram, It offers a superb battery capacity of 3000 (mAh) that doesn’t drain earlier, It offers a widescreen size of 5.5 inches that is good for games, films and browsing the internet.

Motorola Moto G4 includes an acceptable resolution of 1080×1920 pixels, It presents a high pixel density of 401 (ppi), It offers a high performance without any lags as it comes with a processor of 1.5 GHz octa-core.

Motorola Moto G4 comes with a wonderful rear camera of 13 megapixels with high quality pictures and videos of a quality of HDR, the secondary camera comes with resolution of 5 megapixels, You can take pictures and make video calls with the auto HDR feature.

Motorola Moto G4 offers the last operating system of android v6.01 (Marshmallow), It comes with 4G in India (Band 40), It supports an ambient light sensor, It provides you with a sleek design and it presents a good build quality.

Motorola Moto G4 doesn’t offer Java, It is very thick with a thickness of 9.8 mm, the battery can’t be removed by the user, It offers only two colours which are black and white, It doesn’t offer NFC or infrared or USB OTG.