Aquatic robots can sail, submerge or crawl underwater, Robotic fish can be used during human-induced ecological disasters that are affecting life in aquatic environments, such as oil spills, and man-made structures, such as dams, Driving force on aquatic robots can be tails, fins, thrusters, wings, thrusters, paddles, paddle wheels, air pumps etc, based on your robot design.

Aquatic robots are a vast unexplored field of robotics, Each design is assured to be unique, They can test any environment from a local pond, a bucket of water or a swimming pool, They can move underwater, They are inspired by fish and they use their fin-like actuators to maneuver in water, Underwater Crawling robots are a marine version of land-based robots, They either roll on wheels or walk under water, if waterproofing is taken care, these robots can be easily designed and built.

Swimming robots are as cool as the flying robots, the only difference is that instead of flying they can swim, These robots can take the form of insects, fish or big slithering snake you just name it, They can be used underwater & They are used to explore and gather information about our marine environment. 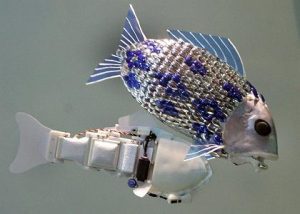 Robot fish has a cable that carried power and instructions down to the robot, the robot can take video images & pictures, It has stereoscopic video cameras and control mechanisms, It can collect the artifacts and gather information about the water conditions, By learning how to study extreme environments on earth, scientists will be better prepared to study environments on other planets.

If you are interested in building a robot to maneuver in a local pond or your swimming pool, There are a few challenges you need to overcome before designing an aquatic robot, You should make all the electronics waterproof, There are many ways by which electronics can be made waterproof such as enclosing all the circuits and electronics in an air-tight container, Enclosing the circuits in oil-filled containers which resists water inflow, Using hot-glue all over the circuits and then submerging them.

Robot boats can float over water, they are not designed to submerge in water, They can be either autonomous or remotely controlled, This is the easiest form of the aquatic robot as it does not involve complex waterproofing of electronics like most of the electronics can still stay away from water.

Underwater Exploratory Robots can go underwater longer and deeper than humans, They can take samples and test water, They can travel waters not suitable for humans, They are used for research about animals and underwater wildlife, they do not tend to have many arms or joints, most fish robots are used for researching, Some have motors, some are gliders that ride ocean currents and dive.

Some fish robots have arms to pick up trash, End effectors are not multi-functional on robots with simple arms, Most underwater robots only collect data and water samples, They can get the instructions from a satellite phone on its tail, Some that operate close to the shore are remote controlled, they help track animals by showing the distance and how they are swimming.

Fish robots can be used for many opportunities in commercial applications, Two fish robots can go out together and use sensors to tell where the other robot is & the other animals, They can sense how deep they are, so, they can know whether to go up or down, They can ensure safety to people who can’t do that certain task.

Exploratory robots can gain information that we can’t physically obtain, They can explore unknown places underwater, Some underwater exploratory robots can clean up the ocean, They help with design & conduct engineering analysis to support the development of mechanical components and assemblies, They help make the robot actually work, They fix any problems that may occur while testing the robot before actual use.

There are only a few successfully built aquatic robots due to the challenging environment they work, There are many hindrances while building aquatic robots such as Waterproofing, Most of their parts do not like water, electricity & electronics essentially hate water, and not waterproofing the circuitry resulting in shorting your entire circuit.

Making a robot to work in water can end up in undesirable failures, Fish robots can sink or leak underwater, There is very little robotic community to provide help, fish robots have limited wireless communication and they are very expensive.

Deeper depths require more sophisticated designs and considerable research, A few numbers of aquatic robots would mean less support and minimal available resources, Not all land-based sensors work in the same way in the water, The density and weight of robot affects the working of marine-based robots, which can be easily ignored in land-based robots.