The domestic robot or the service robot is an autonomous robot that is used for household chores, most domestic robots are simplistic, some are connected to Wi-Fi home networks or smart environments and they are autonomous to a high degree.

There are only a few limited models, most of the personal & domestic robots are used for basic household chores, while the others are educational or entertainment robots, Domestic robots include robot vacuums, robot pet care, pool cleaners, lawnmowers, and more.

The robots are capable of a wide variety of interactions including health care and monitoring medication compliance, security monitoring, education, errands, and entertainment. 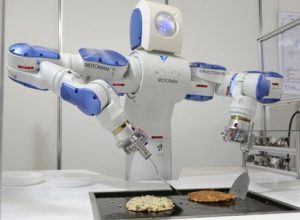 The indoor robot is a type of domestic robot that does the chores around and inside homes, There are different kinds such as robotic vacuum cleaners and floor-washing robots which clean the floors with sweeping and wet mopping functions.

Dress-man is the robot to iron the shirts using hot air, Cat litter robots are automatic self-cleaning litter boxes that filter clumps out into a built-in waste receptacle that can be lined with an ordinary plastic bag, And the robot can be configured to go into action at any time of the day.

The security robots have a night-vision-capable wide-angle camera that detects the movements and intruders, It can patrol places and shoot video of suspicious activities, and send alerts via email or text message, the stored history of past alerts and videos are accessible via the Web.

The outdoor robots are the domestic robots that perform the different chores that exist outside of the house, There are the automated pool cleaners that clean and maintain the swimming pools autonomously by scrubbing in-ground pools from the floor to the waterline in 3 hours.

Robotic lawnmowers are one type of outdoor robot which cut the grass on their own without the need for a driver, Some models can mow complicated and uneven lawns which are up to three-quarters of the acre in size.

Looj cleans the house gutters, You can operate the device using the remote, Gutter-cleaning robots can blast through debris, clogs, and sludge in the gutters, and brush them clean.

Robotic toys such as the well-known Furby, There are small humanoid remote-controlled robots, electronic pets such as robotic dogs can be companions for children, and there are phone-powered robots for fun and games such as Romo which is the small robot that employs smartphones as its brain.

The social robot is the robot whose main objective is social interaction, Many robots are designed to help the elderly, the Wakamaru is the humanoid robot designed to provide company for elderly and less mobile people, There is the Paro, the robot baby seal that provides comfort to nursing the home patients.

Through the remote-controlled telepresence robots, You can visit a distant location and you can explore it as if they were physically present, They can move around in the remote location and let one communicate with the people there via its camera, speaker, and microphone.

These robots can permit the healthcare workers to monitor the patients or they allow the children who are home-bound because of injuries, illnesses, or other physical challenges to attend school remotely, JIBO and ConnectR are family robots that include telepresence.

The network robots link ubiquitous networks with the robots, They contribute to the creation of new lifestyles and solutions to address a variety of social problems including the aging of the population and nursing care.

Robotics at home have the prime benefit of making life effortless for the families that they reside with, Especially for the mothers, if even a couple of chores such as vacuuming and washing the dishes could be eliminated, it would leave more time to focus on being rearing their children.

The Roomba is a robot that specializes in vacuum cleaning, The features include a superb built-in, automatic adjustment between the floor types and also strong cleaning functions to pick up pet hair.

The robotics in the home has the ability to help the handicapped maneuver and serve as companions for the elderly, The robot becomes more advanced and robotic cameras become cheaper, the rest of society will have access to them and be able to make use of them in their households.

Disabled people have been using dogs and monkeys for years to help them with the household tasks they are unable to take care of, The EI-E robot can use laser recognition, so, you can point to the task and you can voice the commands to control the robot.

Employing robots in the home can provide personal security, The cameras are self-automated and they can take the pictures and videos of the environment such as WowWee Robotics that aid the families who have been robbed in catching the thief or deflecting any intruders.

The robots help us, They make life easier, and they are harmless, But in retrospect, giving robots too much access to our daily lives could lead to disaster worldwide, The people depend on technology and robotics at home, and they could not bear to live without them.

Robotics can not respond in times of danger as humans can, the production and purchasing of robots are very expensive and this could harm the global economy, But robotics in the home can cause conflict because everyone will not be able to own one, even if they need it and they just do trivial tasks.

Robotics in the home has a high cost for both production and purchasing, Robots cost millions of dollars to build and many companies invest much money in programming and the involved research.

The robots have a specific job to do that is ordered by their operator, and if the robot has malfunctions, The chaos will happen, We become overly dependent upon robot technology.

The robots can aid the disabled and elderly if the people find themselves in dangerous situations, The robots can not help them, We can not invest our entire trust in the robots to care and give companionship to our family members, If an emergency occurs, the robot will not be able to dial 911 and it will not give the vital information to the emergency services.

The importance and uses of educational robotics for the students