General properties of halogens in the modern periodic table

The properties of the halogens.

The halogens exist in the form of diatomic molecules (they are formed of two atoms), The halogens tend to gain one electron during the chemical reaction and convert into negative ion which has one negative charge. 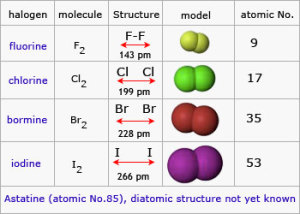 Halogens are formed of two atoms. They are diatomic molecules.

The physical state of the halogens is graduated from the gas to the liquid to the solid. Fluorine and Chlorine are gases, Bromine is a liquid, and Iodine is solid.

Halogens are the active elements

The halogens are the active elements, therefore, they do not exist in nature in the elementary state, but they are found combining with the other elements forming the chemical compounds (except Astatine (At) which is prepared artificially).

Each element of the halogens replaces the element below it in its salt solution.

The lanthanides and actinides in the modern periodic table