Nature of the reactants

Surface area exposed to the reaction plays an important role in the rate of the reaction, For example when two equal masses of zinc metal, one in the form of powder, the other in the form of a black are placed, each separately in a test tube, and an equal volume of dilute hydrochloric acid is added to each, you can observe that the reaction with zinc powder is completely in a shorter time than that with zinc block.

In the reaction: 2SO2 + O2 → 2SO3, The rate of reaction decreases extremely when we use the platinum as sheets not a powder because as the surface area of catalyst increases, the rate of chemical reaction increases. 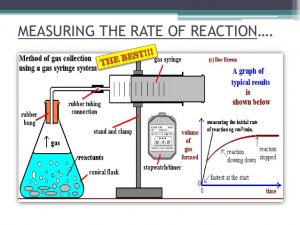 Law of mass action: At a constant temperature, the rate of the chemical reaction is directly proportional to the product of multiplication of the reactant concentration, and each is raised to the power of the number of molecules or ions in the balanced chemical equation.

If an excess amount of iron (III) chloride is added, the red colour of the solution increases indicating formation of more iron (III) thiocyanate when the rate of the backward reaction (r2) equals the forward reaction (r1).

According to the following equation, H2 + Cl2 → 2 HCl, Kc = 4.4 × 1012, The dissociation of hydrogen chloride to its elements is very difficult because Kc value of the reaction is high which indicates that the forward reaction is the predominant reaction.

Although the reaction of nitrogen gas with hydrogen gas is an exothermic reaction, the reaction does not start until the reactants are heated, until the molecules gain the activation energy required to start the reaction.

Effect of temperature on the rate of reaction

When the flask containing the gas is removed from this cooling mixture and kept at room temperature (25°), we found that the reddish-brown colour starts to reappear gradually, this can be explained according to the following equilibrium equation.

We deduce from this experiment that if an exothermic reaction has reached the equilibrium state, The decrease in temperature force the reaction to proceed in the forward direction in order to liberate heat.

The colour of nitrogen dioxide disappears on cooling because decreasing the temperature from equilibrium, exothermic reaction forces the reaction to proceed in the forward direction in order to liberate heat (direction of formation of colourless N2O4.

It is worth mentioning that the concentration of a substance in the solution is given in a terms of molarity and is expressed by placing the substance between two square brackets [ ], If the reactants or products are in the gaseous state, the concentration is expressed by using their partial pressure, for example, ammonia gas is prepared in industry from its elements according to the following reaction.

Four molecules react to form two molecules, the formation of ammonia gas is accompanied by a decrease in the number of molecules and consequently a reduction in the volume, It was found that by applying pressure and cooling, the rate of ammonia formation increases.

So, by increasing the pressure or cooling on a gaseous reaction under equilibrium, a shift in the direction of reducing the pressure (or the direction in which volume is less) takes place, In this case, the equilibrium constant is expressed by the symbol Kp to indicate that the concentrations of the substances are expressed by the partial pressure.

The equilibrium constant of the above reaction can also be expressed in terms of the molar concentration, Le chatelier formulated a rule that predicted the effect of different factors such as concentration, temperature and pressure on the system under equilibrium.

Le chatelier’s principle: The changes in any of the conditions of a chemical equilibrium such as concentration, pressure or temperature cause shift of the equilibrium in the direction which will oppose this change.

The quantity of water vapour which is prepared from its elements increases as the pressure increases because by increasing the pressure on a gaseous reaction under equilibrium, a shift in the direction in which the number of moles is less takes place.

Catalytic converters in car exhaust systems convert the gaseous combustion products, which cause air pollution into safe products, Catalysts are metals, metal oxides or compounds, Enzymes are high molecular weight proteins produced in living cells, they act as a catalyst for many biological and industrial processes.

Some chemical reactions are affected by light, the photosynthesis is an example in which chlorophyll in plants absorbs light and form carbohydrates in the presence of carbon dioxide and water.

Photographic films contain silver bromide in a gelatinous layer when light falls on such films, silver ions accept electrons from bromide ions are converted into silver metal, Bromine is absorbed in the gelatinous layer, the increase in light intensity is accociated with an increase in the amount of silver formed.

The factors affecting the speed of chemical reactions