What are the sources of atmospheric nitrogen gas?

Nitrogen gas exists in the atmosphere with a percentage of 78 %, It contributes in the composition of all living tissues of living organisms, and it is used as a biological nitrogen source by a certain bacteria.

Nitrogen gas exists in the legumes (such as the clover, the peas, and the soybeans) that contain the protein, where their roots contain the nodular bacteria that takes the atmospheric nitrogen and converts it into the protein. 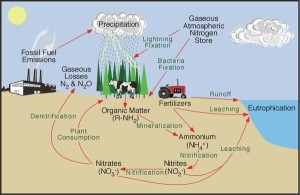 When the plants convert the nitrogen, so, nitrogen gas will be returned to the soil or the animals will get it, where the herbivores eat the plants and they convert many of the amino acids into new proteins.

The omnivores can get nitrogen gas by eating both the plants and the animals, and the nitrogen atoms are returned to the soil in dead organisms, so the whole process can start again.

The atmospheric nitrogen is converted to nitrate which is a biologically important form by lightning as oxygen gas reacts with nitrogen gas during the lightning forming nitrogen oxide that reaches the soil during the rain.

The volatile organic nitrogen compounds are released to the atmosphere during the plant decay, and nitrogen contributes to the composition of all the living tissues of the living organisms.

The atmospheric nitrogen is delivered to the sea and the land in the rainfall as dissolved compounds (the wet deposition) and as absorbed compounds on the dust particles and the leaves (the dry deposition).

The most famous elements in 5A group (Nitrogen properties, Preparation & compounds)

The importance and uses of nitrogen gas

What are the properties of nitrogen gas?