The major site of gluconeogenesis is the liver (90%): It can also occur in the cortex of the kidney (10%). It occurs mainly in the cytoplasm and partly in the mitochondria. It is nearly the reversal of glycolysis except for the three irreversible kinases.

Oxaloacetate formed is transported across the mitochondrial membrane in the form of malate. Malate is reoxidized to oxaloacetate by a NAD-linked malate dehydrogenase in the cytosol. Oxaloacetate is decarboxylated and phosphorylated to yield phosphoenol-pyruvate. This reaction is catalyzed by phosphoenolpyruvate carboxykinase (PEPCK) in the cytosol. (rate-limiting step).

Conversion of PEP to glucose

Two molecules of PEP are utilized by the reversal of glycolysis to form fructose 1,6-bisphosphate. The latter is converted to F-6-P by fructose 1,6 bisphosphate, present in liver and kidney then to G-6-P by phosphohexose isomerase. Free glucose is formed by the action of glucose 6-phosphatase in the liver and kidney, while it is absent in muscles and adipose tissues, thus glucose cannot be formed by these organs. In muscles, G-6-P can be converted to G-1-P then, to glycogen. 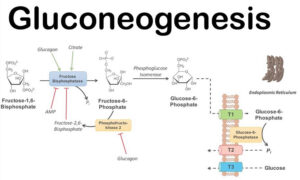 Glycolysis and gluconeogenesis are reciprocally controlled.

Insulin is a repressor for the synthesis of gluconeogenic 4 key enzymes, and at the same time, it acts as an inducer of glycolytic key enzymes. So it inhibits gluconeogenesis.

Anti-insulin (glucagon, adrenaline, and cortisol): are secreted during fasting, stress, and severe muscular exercise. They act as inducers for these enzymes.

It is an alternative oxidative pathway for glucose that does not lead to the generation of ATP, its site is in the Liver cytoplasm, mainly. UDP glucuronic acid (the active form) is needed in: