Complex lipids are widely distributed in plants, bacteria, and animals. They are the major constituents of cell membranes but they are found also in circulating fluids. Complex lipids can be classified into four main groups: Lipids with the phosphate residue, one glycerol, or the aminoalcohol or fatty alcohol, and with one or two fatty chains.

The precursor compound of glycerophospholipids is the phosphoric ester of glycerol (glycerol-3-phosphate). this compound has an asymmetric carbon atom and can exist either in D form or L form, it was found that the L-isomer of glycerol phosphate is found in the natural phosphoglycerols (phosphoglycerides). 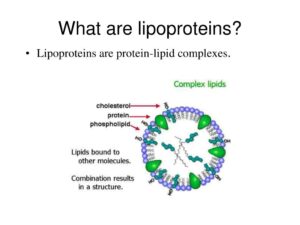 The fatty acids present in phosphoglycerides are one mostly saturated in the 1st position of glycerol, the second is an unsaturated fatty acid, both are high fatty acids, phospholipids because they have phosphoryl bases as polar hydrophilic heads (ionizable heads) in addition to their hydrocarbon non-polar hydrophobic tail are considered (amphipathic).

2- Lecithin (phosphatidyl choline) is the most abundant phosphoglyceride in plants and animals, the base here choline, It is present in the animal’s cell membrane.

Dipalmitoyl lecithin: in this phospholipid position 4,2 of glycerol are occupied by palmitate, this phospholipid is the major lipid components of lung surfactants (The extracellular fluid lining the alveoli), surfactants serve to decrease the surface tension of the fluid layer, therefore, prevent alveolar collapse, its absence from the lungs of premature infants causes respiratory distress syndrome.

3- Cephalin (phosphatidyl ethanolamine) is another abundant phosphoglycerols (phosphoglycerides) which is also found in the animal cell membrane, the base is ethanolamine, there are 3 and 2 cephalin, cephalin is one of the important blood clotting factors.

4- Phosphatidyl serine is cephalin- like and present in many tissues, the base is the amino acid serine.

This group of phospholipids contain sphingosine instead of glycerol, a higher fatty acid as lignoceric acid, phosphoric acid, and a base, they are important membrane components both in plants and animal cells, they are present especially in large amounts in the brain and myelin of nerve tissues.

The amino group of sphingosine is connected by an amide linkage to a long chain saturated or monounsaturated fatty acid, the resulting compound is called Ceramide, it is the characteristic parent structure of all sphingolipids, the most abundant sphingophospholipids in tissues of animals are sphingomyelins, they contain a phosphoryl choline as their polar head group.

Glycolipids are widely distributed in every tissue of the body, particularly in nervous tissue such as the brain, they occur also in the outer leaflet of the plasma membrane having a role in cell communication.

Glycolipids are classified into:

1- Neutral (cerebrosides), according to the monosaccharide bound to the ceramide they are: