Cortisol is a steroid hormone, It regulates a wide range of processes throughout the body, including metabolism and the immune response, It has a very important role in helping the body respond to stress, It participates in many homeostatic maintenance actions such as blood pressure; immune system; metabolism of protein, carbohydrate, and adipose; and anti-inflammatory action.

It secretes corticotropin-releasing factor (CRF) which acts on the anterior pituitary to increase secretion of ACTH.

The anterior pituitary gland secretes ACTH. It is a large polypeptide controlled by the hypothalamic corticotrophin-releasing factor (CRF). ACTH causes the formation of adrenocortical hormones. Long-term stimulation of the adrenal cortex by ACTH causes hypertrophy and proliferation of the adrenocortical cells, especially in the zona fasciculata and reticularis where excess cortisol and androgens are secreted.

When ACTH is secreted by the anterior pituitary gland, several other hormones that have similar chemical structures are secreted simultaneously as melanocyte-stimulating hormone (MSH), lipotropin, and endorphin. Under normal conditions, none of these is known to be secreted in enough quantities to have a significant effect on the body, but this may not be true when the rate of secretion of ACTH is very high. MSH causes the melanocyte to form melanin pigments. ACTH is similar to MSH. It has a melanocyte-stimulating effect as MSH. 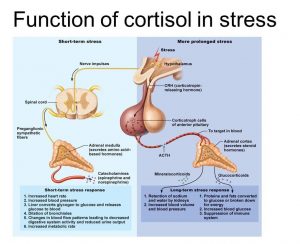 4. The effect of physiological stress on ACTH secretion

Physical or mental stress can lead within minutes to increase secretion of cortisol. Stimulus caused by the stress is first transmitted upward to the hypothalamus and from there to the anterior pituitary where ACTH is secreted. Within minutes, large quantities of glucocorticoids are present in the blood.

Cortisol is high in the early morning (between 6-8 a.m), but low in the late evening This effect results from a 24-hour cyclic alteration in the signals from the hypothalamus that case cortisol secretion.

Effects of hypersecretion of glucocorticoids

Effects of hyposecretion of glucocorticoids

Cause of melanin deposition

When cortisol secretion is depressed the normal negative feedback to the hypothalamus and anterior pituitary is also depressed, so allowing increase rates of ACTH secretion as well as simultaneous increase amounts of melanocyte-stimulating hormone (MSH).

Probably, the tremendous amounts of ACTH cause most of the pigmenting effect because these can stimulate the formation of melanin by the melanocyte in the same way that MSH does. This condition is known as Addison’s disease. It is usually associated with mineralocorticoids deficiency.

Adrenal androgens are continually secreted by the adrenal cortex, especially during fetal life. Also, progesterone and estrogens which are female sex hormones are secreted in very minute quantities, Part of the early development of the male sex organs results from childhood secretion of adrenal androgens.

Androgens exert masculinizing effects, they promote protein anabolism and growth, The adrenal androgens also exert mild effects in the female, not only before puberty, but also throughout life, Much of the growth of the pubic and axillary hair in the female probably results from the action of these hormones.

The adrenocortical tumor secretes excessive quantities of androgens that cause the intense masculinizing effects throughout the body, In the female, she develops virile characteristics (virilism) including the growth of a beard, a much deeper voice, masculine distribution of hair on the body and on the pubis, growth of the clitoris to resemble a penis, and deposition of proteins in the skin and especially in the muscles to give typical masculine characteristics.