Fourth generations, however, have the broadest spectrum activity, The fifth-generation cephalosporin has activity against many Gram-positive organisms (including MRSA and many other resistant Gram-positives), as well as some Gram-negative organisms (but not Pseudomonas).

Absorption: Many of cephalosporins must be administered parenterally because of their poor oral absorption.

Distribution: All cephalosporins distribute very well into body fluids. However, adequate therapeutic levels in the CSF, regardless of inflammation are achieved with only a few cephalosporins, e.g. ceftriaxone, and cefotaxime.

Elimination: Cephalosporins are eliminated through the kidney, therefore, doses must be adjusted in cases of renal dysfunction. However, ceftriaxone and cefoperazone are excreted through the bile into the feces, therefore they are frequently used in patients with insufficiency. 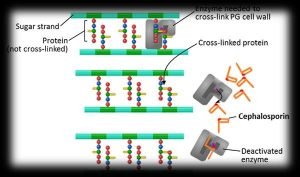 They do not cross the meninges; thus, they are not used for the treatment of meningitis.

They have the following antimicrobial activity:

They have the following antimicrobial activity:

They have the broadest spectrum of activity on Gram-negative, including Pseudomonas, and similar activity against Gram-positive organisms to that of the first generation. They have a greater resistance to beta-lactamases than third-generation cephalosporins. They have weak anaerobe coverage.

Ceftaroline is unique in its activity against multidrug-resistant Staphylococcus aureus, including MRSA and Vancomycin-resistant S, aureus (VRSA), It has a similar Gram-negative coverage to the third generation with no Pseudomonas coverage.

They include imipenem/cilastatin, meropenem, and ertapenem.

They have the following antimicrobial activity against:

They are given parenterally either by the intravenous or intramuscular route, They penetrate well body tissues and fluids, including the CSF, Imipenem is metabolized extensively by dihydro-peptidase I in the brush border of the proximal renal tubular cells and the metabolite is excreted in the urine, Cilastatin offers protection against dihydropeptidase I, resulting in an increase in the urinary excretion of intact imipenem, They depend mainly on renal elimination. Dose adjustment is required in patients with renal impairments.

Many are serious due to resistant Gram-negative organisms and mixed aerobic/anaerobic organisms, including hospital-acquired meningitis and intra-abdominal infections.

Contraindications: Patients, who have severe penicillin hypersensitivity, should not receive carbapenems.

It has a narrow antibacterial spectrum. It is active only against Gram-negative aerobic bacilli including Pseudomonas aeruginosa. It is resistant to beta-lactamases. It has no activity against Gram-positive bacteria or anaerobes.

Aztreonam is given intravenously. It is cleared by the kidney, therefore, dose adjustment is required in renal impairment.

It can be given to patients allergic to penicillin or cephalosporins, It has no cross-sensitivity with penicillin.

Spectrum: Vancomycin is a bactericidal time-dependent antibiotic. It is active only against Gram-positive bacteria including MRSA.

Pharmacokinetics. It is not significantly absorbed from the normal gastro-intestinal tract, therefore, it is given parenterally as a slow intravenous injection or intravenous infusion. It is eliminated by the Kidney, thus, the dose should be adjusted according to creatinine clearance.

Irritation leads to phlebitis at the site of infection.

Ototoxicity: Vestibular damage and/or cochlear damage associated with tinnitus and sensorineural hearing loss have been reported. It is more likely to occur with larger doses given to an older patient. The patients could present by dizziness, tinnitus, and decreased hearing perception. Ototoxicity has even been reported with oral vancomycin.

Nephrotoxicity: Acute kidney injury is more likely to occur in the following condition:  use of larger doses and longer duration of vancomycin administration. Concurrent use of other agents with potential nephrotoxicity. Such agents include piperacillin-tazobactam and aminoglycosides. In critically ill patients, who are susceptible to poor renal perfusion.

It is a useful antimicrobial agent with a similar spectrum of antimicrobial activity to vancomycin, but resistant organisms to either antibiotics are sometimes sensitive to the other.

Advantages over vancomycin: It only needs to be given once a day, does not need to be given as slowly as vancomycin, and can be given by intramuscular injection. Also, it is less nephrotoxic and is preferred in the patient at high risk of acute kidney injury.

It is a polypeptide antibiotic, used against Gram-positive bacteria usually topically with neomycin and polymyxins to prevent superficial skin and eye infections.