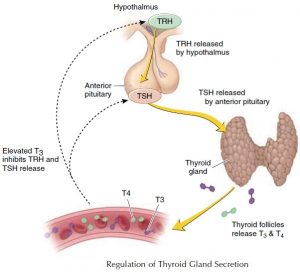 Effects of TSH on the thyroid gland

Physical retardation is manifested by the delayed eruption of teeth, sitting, walking and delayed closure of the fontanels (gaps in the skull). Skeletal growth in the cretin is characteristically more inhibited than in soft tissues growth. As a result of this disproportionate rate of growth, the soft tissues are likely to enlarge excessively. So;

In hypothyroid infants, synapsis develops abnormally, myelination is defective, and mental development is retarded. Mental retardation leads to speech defects and incontinence of urine and feces. The mental changes are irreversible if replacement therapy was not begun soon after birth. The condition is known as cretinism.

Certain substances that have actions similar to that of TSH are found in the blood of these patients. These substances, called long-acting thyroid stimulators (LATS), are now known as thyroid-stimulating immunoglobulin (TSI), and bind with the thyroid cell membrane receptor instead of thyroid-stimulating hormone. This causes continual stimulation of these receptors resulting in excess formation of thyroid hormone (Grave’s disease). A high level of thyroid hormones will lead to:

5. On GIT: increase the movement of the gastrointestinal tract causing diarrhea and increased appetite.

6. In Graves disease the thyroid gland is diffusely enlarged and active, the number of cells is increased, and each cell increases its rate of secretion.

In certain types of hyperthyroidism (Graves’ disease), the patient develops exophthalmos or bulging of the eyes, The cause of this phenomenon is due to the depositing of complex, water-retaining carbohydrates behind the eyes, with degenerative changes in the extraocular muscles, The cause of which is still unclear.

The resulting fluid retention pushes the eyeballs forward so they bulge from their bony orbit-The eyeballs may bulge so far that the lids cannot completely close, in which case the eyes become dry and irritated. These eye symptoms may persist even after correction of the hyperthyroid condition, as it is not caused by increased thyroid hormone level, however, It is an autoimmune process.