Viruses multiply only in living cells. The host cell provides the energy, synthetic machinery, and low molecular weight precursors for the synthesis of viral proteins and nucleic acid. The viral genome contains the information necessary to cause the infected cell to synthesize virus-specific macromolecules required for the production of viral progeny.

Soon after interaction with a host cell, the infecting virion is disrupted and its infectivity is lost. In some cases, as soon as the viral nucleic acid enters the host cell, the cellular metabolism is redirected exclusively towards the synthesis of new virus particles, and the cell is destroyed. In other cases, although the cell synthesizes viral proteins and nucleic acids, its metabolic processes are not altered significantly, and the cell is not killed.

The virus-cell interaction may end in:

1- Recognition and attachment to the host cell

Thus, it is the main determinant of tissue tropism (susceptible target cell eg. liver cell, nerve cell) and host range (restriction of infection to certain species eg. human, mouse). This attachment is achieved when specific proteins (VAP) on the viral capsid (in naked viruses) or viral envelope (in enveloped viruses) interacts with receptors on the plasma membrane of the target cell. 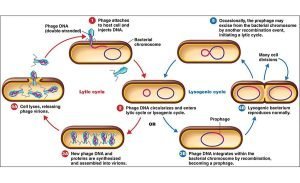 Uncoating is the physical separation of the viral nucleic acid from the outer structural components of the virion, Nucleocapsids are delivered to the site of replication within the cell; the genome of DNA viruses is delivered to the nucleus (except for pox viruses) while that of most of the RNA viruses remain in the cytoplasm where they replicate.

The eclipse phase is one of intense synthetic activity as the cell is redirected towards the synthesis of virus-related structures. At this step, specific mRNAs are transcribed from the viral nucleic acid, followed by the translation of mRNA to viral proteins using cell components.

Negative sense viruses: their single-strand RNA genome is complementary to mRNA, which is conventionally designated positive strand. These viruses carry their own RNA polymerases to synthesize mRNAS.

4- Morphogenesis (Assembly of the virus)

Naked viruses are generally released after the lysis of the cell. Release of most enveloped viruses occurs after budding from the plasma membrane (but may involve other membranes in the cell). Virus envelope glycoproteins are inserted into cellular membranes; the assembled nucleocapsids then bud through the membranes at the modified sites and in doing so acquire an envelope.

Reinitiation of a Replication Cycle (i.e. spread of infection)

The virus released to the extracellular media is responsible for initiating new infections ie infection of surrounding cells or other susceptible hosts. However, initiation of new infections could be also achieved by:

These routes allow the virus to escape antibody detection.

Bacteriophages are bacterial viruses with a DNA or RNA genome surrounded by a protein shell, Bacteriophages occur in more than 140 bacterial genera and in many different habitats, They can survive outside the bacterial host cell and can be transmitted from one cell to another.

A classical phage consists of a head and a tail structure:

Phages can be distinguished on basis of their mode of propagation into:

When temperate phages infect susceptible bacterial cells, they can either: Replicate and produce a large number of phages, releasing them into the extracellular environment following cell lysis i.e. lytic infection, or the Phage genome becomes integrated into the bacterial chromosome without killing the host and is then called prophage i.e. lysogenic state or lysogeny.

Lysogenic bacteria is the bacteria that carries a prophage, A key feature of lysogeny is the repressor protein synthesized under the direction of the phage, which blocks detachment of the prophage and blocks the expression of other phage genes.

Importance and uses of bacteriophages