Changing a single nucleotide base on the mRNA can lead to any of the three results:

It results from deletion (removal) or insertion (addition) of one or more nucleotides in DNA that generates altered mRNAs with different effects on protein structure. 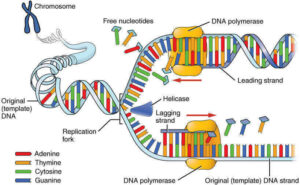 Each gene can be divided into coding and regulatory regions, as defined by the transcription start site. The coding region contains the DNA sequence that is transcribed into mRNA, which is translated into proteins. The regulatory regions consist of two classes of elements:

(A) Basal expression elements consist of the proximal element of the TATA box that direct RNA polymerase II to the correct start site (+1) and the upstream element e.g. CAAT box or GC box that specifies the frequency of initiation.

(B) Regulated expression elements: (Cis-acting elements): They are specific DNA sequences that are present on the same gene, so-termed Cis-elements, and are responsible for the regulation of expression, they can exert their effect on transcription even when separated by thousands of base pairs from a promoter, they include the following elements:

III- Post-Transcriptional Regulation:
Regulation can occur during the processing of the primary transcript (hnRNA) and during the transport of mRNA from the nucleus to the cytoplasm.

V- Post-Translational Regulation:
After proteins are synthesized, their lifespan is regulated by proteolytic degradation, proteins have different half-lives, some last for hours or days, others last for months or years, some proteins are degraded by lysosomal enzymes, other proteins are degraded by proteases in the cytoplasm. Some of these proteins appear to be marked for degradation by attachment to a protein known as ubiquitin, ubiquitin is a highly conserved protein, there is very little variation in its amino acid sequence between organisms.