Purines are essential for the synthesis of nucleic acids, proteins, and other metabolites as well as for energy-requiring reactions, Purines are the main components of nucleotides in cell proliferation, so, impaired purine metabolism is associated with the progression of cancer, purine nucleotides can be synthesized by the de novo and/or the so-called “salvage” pathways.

Purine nucleotides are important for all living organisms, they serve as precursors for the synthesis of nucleic acids and other metabolites. They also function as sources of energy for physiologic and metabolic reactions.

Sources of atoms in the purine ring

The atoms of the purine ring are contributed by a number of compounds, including the amino acids aspartic (N1), glycine (C4, C5. N7), and glutamine (N3, N9), CO₂ (C6), and derivatives of tetrahydro folic acid (C₂, C8). The liver is the major site for denovo synthesis of purine.

The purine ring is constructed by a series of reactions that add the donated carbons and nitrogens to a preformed ribose 5-phosphate obtained from the hexose monophosphate shunt: 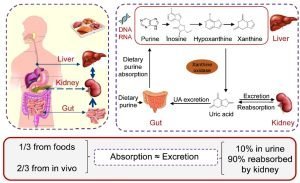 Conversion of IMP to AMP

Conversion of IMP to GMP

Deoxyribonucleotides are formed by direct reduction at 2-carbon in the ribose moiety of the corresponding nucleotide. The reduction at C2 carbon occurs only after the conversion of the nucleotide to its nucleoside diphosphate (ADP, GDP, UDP, CDP → (dADP, dGDP, dGDP, dUDP, dCDP, respectively), This reaction is catalyzed by the ribonucleotide reductase complex, Reduction requires thioredoxin (a protein cofactor), thioredoxin reductase (a flavoprotein), and NADPH.

Definition: Reuse of Purines or to less extent their nucleosides that result from the normal turnover of cellular nucleic acids and are not degraded to be reconverted into nucleoside triphosphate and used by the body.

Definition: It is characterized by an excessive amount of uric acid in the blood (Normal blood level of uric acid is 3-7 mg/dL in males and 2-6 mg/dL in females.)

Causes; In many cases, it is due to accelerated production of uric acid, secondary to the degradation of unusually large quantities of purines.

I- Primary hyperuricaemia may be due to:

a) Abnormalities of purine metabolism.

b) Abnormalities in other metabolic pathways.

Il- Secondary hyperuricaemia is due to:

Definition: Gout is a metabolic disease characterized by an excessive amount of uric acid in the blood (hyperuricaemia).

Pathophysiology: serum urate levels exceed the solubility limit resulting in the crystallization of sodium urate in soft tissues and joints forming deposits, and causing an inflammatory reaction, especially in the big toe. Sodium urate may be precipitated in the kidney tubules causing renal stones.