The liver can filter all of the blood in the body and breaks down poisonous substances, such as alcohol and drugs, It produces bile, a fluid that helps digest fats and carries away waste, It consists of four lobes, which are each made up of eight sections and thousands of lobules (or small lobes).

The liver is located beneath the rib cage in the right upper abdomen, It can remove toxins from the body’s blood supply, It maintains healthy blood sugar levels, It regulates blood clotting, and performs hundreds of other vital functions.

Functions of the Liver

The liver performs over 500 vital functions, These include removing waste products and foreign substances from the bloodstream, regulating blood sugar levels, and creating essential nutrients. The liver removes excess glucose (sugar) from the bloodstream and stores it as glycogen, it can convert glycogen back into glucose.

The Liver filters Blood: All the blood leaving the stomach and intestines passes through the liver, which removes toxins, byproducts, and other harmful substances. Bile is critical to the digestion and absorption of fats in the small intestine, Albumin keeps fluids in the bloodstream from leaking into surrounding tissue, It carries hormones, vitamins, and enzymes through the body.

The liver resists Infections: As part of the filtering process, the liver also removes bacteria from the bloodstream. The Liver stores vitamins and minerals: The liver stores significant amounts of vitamins A, D, E, K, and B12, as well as iron and copper. 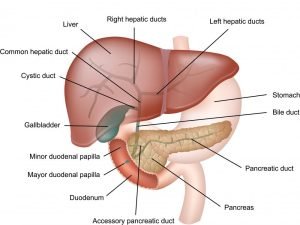 Development of the liver