The liver cells excrete a number of substances. Among the most important of these are bile pigments “bilirubin and biliverdin”, which are the major end-products of hemoglobin and myoglobin metabolism. They have no digestive function. The normal concentration of bile pigments is about 0.2-0.8 mg/ 100 ml of plasma.

When the red blood cells have lived out their life span, about 120 days, their cell membrane rupture and hemoglobin are attacked by the macrophages which are present in the spleen, bone marrow, lymph nodes, and connective tissues and according to the following steps:

1. The hemoglobin is first split into globin and haem, further split of haem molecule into iron and biliverdin, the amino acids formed from the breakdown of globin in addition to iron are stored in the body as a reserve for erythropoiesis (recycled), reduced to bilirubin.

2 Bilirubin is released into the plasma and combines with plasma proteins (mainly albumin) forming a water-insoluble compound called haembilirubin, which rapidly enters the liver. 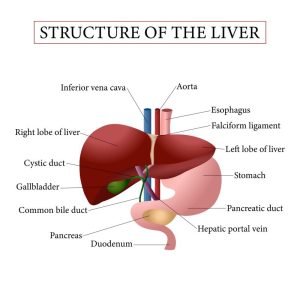 3. In the liver, haembilirubin dissociates and free bilirubin enters liver cells. Bilirubin is conjugated with 2 molecules of glucuronic acid catalyzed by the enzyme glucuronyltransferase, this conjugated form is water soluble (bilirubin diglucuronide or cholebilirubin) and is excreted by an active transport process against a concentration gradient into the bile ducts to the intestine, Where it is reduced by the action of intestinal bacteria to stercobilinogen.

Normally, a small amount of bilirubin diglucuronide leaks from the bile canaliculi to the general circulation and is excreted in the urine. So the plasma contains two forms of bile pigments, the bile pigments protein complex (haembilirubin) and traces of the conjugated bilirubin (cholebilirubin) which escapes from the liver to the bloodstream.

Cholebilirubin is filtered through the kidney and passes in urine, while haembilirubin does not pass because of its large molecules and insolubility in water. Normal urine is considered free from both types of pigment.

Deviations from this ratio may cause cholesterol to precipitate; leading to one type of gallstones. Cholesterol is a precursor of bile salts (cholic acid), sex hormones, and adrenal steroids, It helps the absorption of fats, and it is a constituent of the cell membranes.

b. Fatty acids and lecithin

Fatty acids and lecithin have a role in the emulsification of fats and micelles formation.

The word “jaundice” means a yellowish tint or discoloration of the skin, sclera, mucous membranes, and deep tissues due to increased serum bilirubin above normal value (normal value 0.2-0.8 mg/d). It is detected clinically when the total plasma bilirubin is greater than 2 mg/100 ml/ causing deposition of bile pigments in tissues.

It is due to excessive haemolysis for any reason, leading to the formation of a large amount of unconjugated bilirubin (haembilirubin) in the blood, and the liver becomes unable to excrete it completely. Haemobilirubin is not filtered from the kidney, consequently, the urine is free from a so it is called “Acholuric jaundice. This condition is associated with haemolytic anaemia. The stool appears darker than normal due to excessive stercobilin formation.

Intrahepatic or extrahepatic obstruction of the bile ducts by atresia, stone in its lumen or by pressure from outside as in cancer head pancreas, leading to stoppage of bile flow from the liver and gall bladder into the small intestine, and regurgitation of large amounts of conjugated bilirubin (cholebilirubin) to the blood.

In this type of jaundice, cholebilirubin is easily filtered through the kidney and is excreted excessively in urine causing dark brown urine (liquorice urine). The stool is clay-colored due to the absence of stercobilin.

This type is due to damage or failure of the hepatic cells by any pathological condition. Normal amounts of haemobilirubin are present, but the liver is unable to excrete them completely (disturbed intracellular protein binding or conjugation or disturbed secretion of conjugated bilirubin into the bile canaliculi). This condition may be associated with mild obstruction of intrahepatic bile canaliculi leading to impairment of excretion of cholebilirubin, and its regurgitation back to the bloodstream.

In this type of jaundice both types of pigments “haemobilirubin and cholebilirubin” are present in the blood in higher concentrations than normal. The stool appears pale grayish in colour due to deficiency of stercobilin, and urine appears dark brown due to filtration of the excess cholebilirubin through the kidney.