VZV causes chickenpox (varicella) and, on recurrence, causes herpes zoster, or shingles, Varicella is a mild, highly contagious disease, chiefly of children, characterized clinically by a generalized vesicular eruption of the skin and mucous membranes. The disease may be severe in adults and in immunocompromised individuals.

Herpes zoster is a sporadic, incapacitating disease of elderly or immunocompromised individuals that is characterized by pain and vesicular rash limited in distribution to the skin innervated by a single sensory ganglion, The lesions are similar to those of varicella, Varicella is the acute disease that follows primary contact with the virus, while zoster is the response of the partially immune host to reactivation of the varicella virus present in latent form in neurons in sensory ganglia.

VZV is spread principally by airborne droplets and by direct contact with skin vesicles, Primary infection begins in the tonsils and mucosa of the respiratory tract, After initial replication in regional lymph nodes, the virus progresses via the bloodstream and the lymphatic system to the liver and spleen.

Secondary viremia spreads the virus throughout the body and to the skin, where the typical rash develops, Virus replication in the lung is a major source of spread to other hosts, Following primary infection, VZV becomes latent in the dorsal root, cranial nerve, and other ganglia, It can be reactivated in older adults when immunity wanes or in patients with impaired cellular immunity.

On reactivation, the virus replicates and is released along the length of the neuron to infect the skin, causing a vesicular rash along the entire dermatome, which is known as herpes zoster, or shingles. This damages the neuron and may result in painful postherpetic neuralgia. 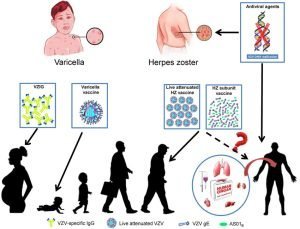 Previous infection with varicella is believed to confer lifelong immunity to varicella, Herpes zoster occurs in the presence of neutralizing antibodies to varicella, The development of varicella-zoster virus-specific cell mediated immunity is important in the recovery from both varicella and zoster.

A live attenuated vaccine for VZV (Varivax) is available, it is administered after 1 year of age and induces the production of protective antibodies and cell-mediated immunity, A stronger version of this vaccine (Zostavax) is available for adults older than 50 years, It has been shown to be effective in at reducing both the frequency of outbreaks of zoster and the severity of the disease.

EBV is ubiquitous with a herpesvirus with a limited host range and tissue tropism. It is the causative agent of acute infectious mononucleosis and has been causally associated with nasopharyngeal carcinoma, Burkitt lymphoma, Hodgkin and non-Hodgkin lymphomas, other lymphoproliferative disorders in immunodeficient individuals, and gastric carcinoma, The major target cell for EBV is the B lymphocyte, Some epithelial cells of the oropharynx and nasopharynx also express the viral receptor.

It is transmitted by infected saliva and initiates infection in the oropharynx, Viral replicates in epithelial cells (or surface B lymphocytes) of the pharynx and salivary glands, Infected B cells spread the infection from the oropharynx to lymphatic tissue and blood. Normally most virus-infected cells are eliminated, but small numbers of latently infected B lymphocytes persist for the lifetime of the host.

B. Reactivation from Latency

EBV may be reactivated when the memory B cell is activated (especially in the tonsils or oropharynx) and may be shed in saliva, Reactivations are usually clinically silent, and Immunosuppression is known to reactivate infection, sometimes with serious consequences.

The triad of classic symptoms for infectious mononucleosis is lymphadenopathy, splenomegaly, and exudative pharyngitis accompanied by high fever, malaise, and fatigue. Some patients develop signs of hepatitis. The typical illness is self-limited for 2-4 weeks. During the disease, there is an increase in the number of circulating white blood cells, with a predominance of lymphocytes, Many of these are large, atypical T lymphocytes.

1- Blood smears: The finding of atypical lymphocytes and the presence of lymphocytosis.

3- Detection of viral nucleic acid using PCR NA probes is the most sensitive means of detecting EBV in blood, body fluids, and tissues.

No effective treatment or vaccine is available for EBV disease, Acyclovir will reduce viral shedding but has no effect on the disease, The ubiquitous nature of the virus and the potential for asymptomatic shedding make control of infection difficult.

CMV is a ubiquitous herpesvirus that is a common cause of human disease, CMV is the most common cause of congenital infection which can lead to severe abnormalities, Although, usually a mild or asymptomatic disease in children and adults, CMV is particularly important as an opportunistic pathogen in immunocompromised patients.

Humans are the only known host for CMV. The virus replicates fibroblasts, epithelial granulocytes, and macrophages and establishes latency in hematopoietic progenitor cells in the bone marrow and monocytes.

CMV may be shed in urine, saliva, semen, breast milk, and cervical secretions and is carried in circulating white blood cells, Transmission from person to person thus occurs in different ways, via the congenital, oral, and sexual routes, blood transfusion, and tissue transplantation.

Both morbidity and mortality rates are increased with primary and recurrent CMV infections in immunocompromised individuals, The virus may be restricted to a single organ, causing pneumonia colitis, retinitis or hepatitis, or cause disseminated infection, CMV is also responsible for CMV-related rejection of renal allografts In untreated AIDS patients; colitis and chorioretinitis are common problems, the latter often leading to progressive blindness.

Fetal and newborn infections with CMV may be severe, The virus can be transmitted in utero with both primary and reactivated maternal infections, Generalized cytomegalic inclusion disease results most often from primary maternal infections, The name derives from the tendency for massive enlargement of CMV-infected cells with intranuclear inclusion bodies.

HHV-6 and HHV-7 are T-lymphotropic viruses. Both primarily infect lymphocytes, especially CD4 T cells and establish a latent infection in hematopoietic progenitor çells. Infection by these viruses occurs early in life, and transmission is via saliva and secretions. Primary infection with HHV-6 or HHV-7 has been linked with exanthem subitum (roseola infantum or Sixth disease in infants and young children.

HHV-8, also known as Kaposi sarcoma-associated herpes virus (KSHV) is not as ubiquitous as other herpesviruses. Usually, infection with HHV-8 is associated with AIDS patients. KSHV is the cause of Kaposi sarcomas; a vascular tumour of skin, lymph nodes, and visceral organs. The virus is most likely spread via oral secretions, but may be spread by other means (sexually, vertically, by blood, and through organ transplants).