Hypoxia is an O2 deficiency at the tissue level. It can lead to hypercapnia, this takes place when the lungs retain too much carbon dioxide due to breathing difficulties. However, hypoxia is a pathological condition, variations in arterial oxygen concentrations can be part of the normal physiology, for example, during hypoventilation training or strenuous physical exercise.

A condition in which PaO2 is decreased in arterial blood i.e. Hb is not fully saturated (O2 content is decreased). 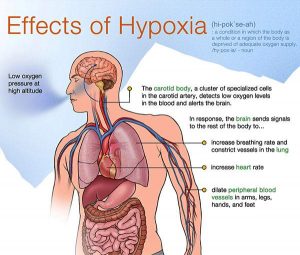 a. Hypoventilation which may be due to: RC depression by drugs as morphine or paralysis of the respiratory muscles.

In which PaO2 is normal but there is a reduced amount of Hb that carries O2 (O2 content is decreased).

A condition in which an adequate amount of O2 is delivered to tissues but the tissues become unable to utilize O2 due to the presence of a toxic substance (eg cyanide). PaO2 and O2 content are normal. Cyanide blocks the action of cytochrome oxidase, thus cannot utilize O2.

Treatment of cyanide poisoning: Injection of mythelene blue or nitrite. They form metHb which has the ability to attract cyanide and bind with it forming nontoxic cyanmetHb. It is then removed from the circulation via the liver or kidney.

There is an increase in the rate of ventilation which is proportional to the severity of hypoxia on the peripheral chemoreceptors.

Effectiveness of O2 therapy in treatment of hypoxia

It is a bluish discoloration of the skin and mucous membrane due to an abnormal increase in the amount of reduced Hb in the blood.

Cyanosis is not liable to occur in: