Properties of metals during chemical reactions & reaction of active metals

The positive ions carry a number of positive charges equal to the number of the lost electrons, The electronic structure of the positive ion is similar to that of the nearest preceding inert gas in the modern periodic table.

Potassium and Sodium are the most reactive

Some metals such as Magnesium (Mg) and iron (Fe) react with oxygen giving the metals oxides which are called “Basic oxides”, Basic oxides are metallic oxides, some of them dissolve in the water forming alkaline solutions. 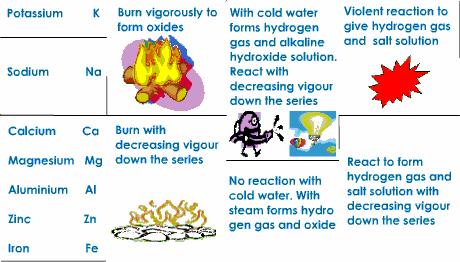 The reaction of some metals with the water.

Potassium and Sodium react instantly with water and hydrogen gas evolves which burns with a pop sound. Calcium and Magnesium react very slowly with cold water. Zinc and Iron react with hot water vapour at high temperatures only. Copper and Silver do not react with water.