Fetal membranes are all the membranes that develop from the zygote and they do not share in the formation of the embryo (extraembryonic structures from the primitive blastomeres). Fetal membranes are Chorion, Amnion, Yolk sac, the umbilical cord including allantois and body stalk.

Later on, due to the growth of the embryo, the primitive yolk sac is reduced in size and transformed into the secondary yolk sac (formed of endoderm surrounded by a layer of splanchopleuric primary mesoderm), the blood vessels are formed in this mesoderm known as vitelline arteries & veins.

The growth of the embryo and the intestinal tract leads to a reduction in the size of the yolk stalk (the vitellointestinal duct). This duct is lodged in the umbilical cord and later on, it atrophies and disappeared completely. 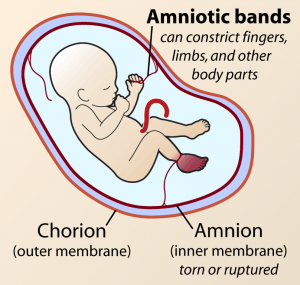 Fate of the yolk sac

Functions of the yolk sac

Abnormalities of the yolk sac

Congenital anomalies of the allantois

Amnion is a membrane that bounds the amniotic cavity. It is continuous with the ectoderm of the embryo. The amniotic cavity contains about 800-1000 ml of watery and clear fluid at the full-term fetus.

Development of the amnion

A small cavity appears within the epiblast layer of the inner cell mass (ectodermal layer) called the amniotic cavity. The cells of the epiblast (ectoderm) adjacent to the cytotrophoblast are called amnioblasts. The amnioblasts (amniotic membrane) from the roof of the amniotic cavity,  the ectodermal layer of the embryonic disc forms the floor of the cavity.

The amniotic cavity filled with amniotic fluid, it increases in size, the layer of the amnioblasts loses its contact with the inner surface of trophoblast and become known as the amnion. After folding the amnion surrounds the embryo from all directions. It increases in size on the expense of extraembryonic coelom until the coelom is obliterated, this leads to a fusion between the somatopleuric primary mesoderm lines the amnion with that lines the inner aspect of trophoblast.

It is formed mainly of water. It comes from two sources:

Clinical uses of the amniotic fluid

The cells, DNA, enzymes, and protein in the amniotic fluid can be used to diagnose chromosomal anomalies of the embryo, e.g. Down syndrome.

Functions of the amniotic fluid

Abnormalities of the amniotic fluid

It is the area of communication between the fetal surface of the placenta and embryo after folding. The structures forming the primitive umbilical cord:

It forms the jelly of Wharton of the definitive umbilical cord.

Structures of the definitive umbilical cord at birth

Postnatal changes in the umbilical cord

Abnormalities of the umbilical cord