The embryo is the early stage of the development of the multicellular organism. Each embryo starts development as the zygote, a single cell resulting from the fusion of gametes, The zygote undergoes many rapid cell divisions, called cleavage, to form the blastula, then, the cells in a blastula-stage embryo start rearranging themselves into layers in a process called gastrulation.

Changes occurring during the second week of development:

1. Further differentiation of the Trophoblast

The trophoblast is formed of two-layer:

Syncytiotrophoblast will form finger-like processes called villi, they erode the material uterine tissues and vessels, leads to the formation of spaces between them filled with material blood, these spaces are called lacuna, The lacuna coaleases together to form intervillous space.

2. Formation of the bilaminar germ disc

Cells of the inner cell mass differentiate into two layers:

The cells of these two germ layers form the bilaminar germ disc (embryo).

3. The formation of the amniotic and yolk sac cavities

4. Formation of the extra-embryonic mesoderm and extraembryonic coelom

It will give rise to:

Syncytiotrophoblast secretes human chorionic gonadotrophin hormone which prevents the degeneration of the corpus luteum. It also stimulates the production of progesterone from the ovary. By the end of the 2nd week, the amount of this hormone will be sufficient to be detected in the maternal blood and urine. This is the basis of the pregnancy test.

The second week of development is the week of twos, because of the following:

Structure of the chorion: The chorion is formed of:

Types of the villi according to structure:

Types of villi according to their function: 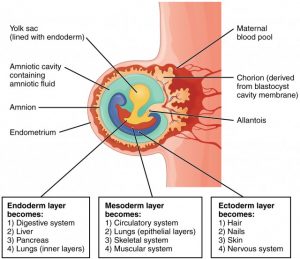 Formation of the primitive streak (groove)

The intraembryonic mesoderm migrates in all directions forming a complete layer of cells separating the ectoderm dorsally from the endoderm ventrally (trilaminar embryo).

Formation of the notochord

Some mesenchymal cells migrate cranially from the primitive node and pit (deep to epiblast), forming a median cellular cord; the notochord.

Functions of the notochord

The third week of development is a very sensitive period in embryonic development. Many factors such as drugs, alcohol, or irradiation to the mother may cause congenital anomalies to her embryo.