Hydrolysis process is the process of dissolution of salt in water and formation of acid and alkali from which the salt is derived, The sodium ion Na+ product from NaOH solution does not tend to react with water because NaOH is a strong electrolyte, completely ionized, Iron III chloride has an acidic effect on litmus solution due to the accumulation of H+ in the solution (pH < 7).

Pure water is a very poor conductor of electricity, but some conductivity is detected, so some ionization of water must take place as shown in the following equation.

For simplification, this equation can be written.

The equilibrium constant is expressed by the relation

From the value of the equilibrium constant, it is clear that a very small number of water molecules ionizes, the number of unionized water can be considered as a constant value, therefore, the above relation can be written as follows:

Ionic product of water (Kw) is the result of multiplying the concentration of the hydrogen ion [ H+] times that of hydroxyl ion [ OH−], Kw is a constant value equals 10−14 mole/liter. 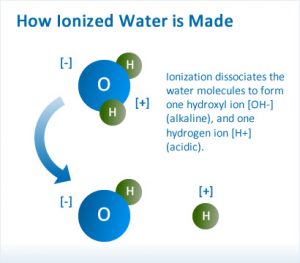 It is the exchange of ions between salt and water to give the acid and base from which the salt was derived.

The acidic and basic property of the salt depends upon the strength of both the acid and the alkali formed due to the hydrolysis of the salt in water.

In order to attain an equilibrium according to le chatelier’s principle, other molecules of water are ionized to compensate for the decrease in hydrogen ions, consequently hydroxyl ions are formed accumulated and increased in concentration, to a level greater than the concentration of hydrogen ions giving pH > 7, thus, sodium carbonate solution is alkaline.

Sodium carbonate solution has an alkaline (basic) effect on litmus solution due to the accumulation of OH− ions in the solution pH > 7, The carbonate anion CO32− produced from H2CO3 solution tends to react with water because H2CO3 is a weak acid, almost not ionized.

It is clear from this reaction, that hydrogen ions, chloride ions & ammonium hydroxide are formed by dissolution of ammonium chloride in water, Hydrochloric acid is not formed because it is a strong electrolyte, completely ionized (H+, Cl−), the presence of chloride ions (Cl−) doesn’t affect water equilibrium but ammonium ions react with hydroxyl ions (OH−), resulting from the ionization of water, to give ammonium hydroxide (a weak electrolyte).

Due to the formation and consumption of hydroxyl ions from water, the equilibrium is shifted, According to le chatelier principle, other (new) molecules of water are ionized to compensate the decrease in hydroxyl ions and to reach a state of equilibrium consequently, hydrogen ions are formed, accumulated and exceeds the concentration of hydroxyl ions, thus, ammonium chloride solution becomes acidic.

Both hydrochloric acid and sodium hydroxide are strong electrolytes and completely ionized, therefore, hydrogen and hydroxyl ions resulting from ionization of water remain constant and the solution is neutral.

Any solute added at this stage will precipitate in the solution, A dynamic equilibrium state between the solid substance (solute) and solution (solvent) is established, where the rate of dissolution equals the rate of precipitation and the concentration of the solution remains constant, In this case, the law of mass action can be applied.

The dissolution of the sparingly soluble lead bromide in the water is given by the relation:

The equilibrium constant is given by the relation:

Solubility product for any sparingly soluble ionic compound is the product of multiplication of the concentration (expressed as mole/liter) of its ions, raised to the power of the number of ions, that exist in the equilibrium with its saturated solution.