The compliance of the lung describes the relationship between the transmural pressure (ie pressure passing through a wall eg hollow structure) across the lung compared with the organ’s volume, Compliance is the extent to which the lungs expand for each unit increase in transpulmonary pressure.

Transpulmonary pressure is the pressure difference between the alveolar pressure and the pleural pressure, When the glottis is open and no air is flowing into or out of the lungs, the pressures in all parts of the respiratory tree (all the way to the alveoli) are all equal to atmospheric pressure which is considered to be 0 cm H2O pressure.

Compliance reflects distensibility. The reciprocal of the compliance is the elastance i.e elastic recoil pressure. When the lungs are remarkably distensible, this means that its compliance is high while its elasticity is low. 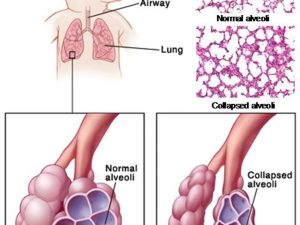 Emphysema is abnormal permanent enlargement or dilatation of the air spaces distal to the terminal bronchioles accompanied by destruction of their walls. Males are more affected than females especially heavy smokers.

Chronic bronchitis is caused by chronic irritation by heavy cigarette smoking. This chronic irritation stimulates hypersecretion of mucous and hypertrophy of mucous glands in the trachea and bronchi. Microbic infection is important in maintaining inflammation and may cause acute exacerbation.

Surfactant and work of breathing

Surfactant is a surface tension lowering agent. It is produced by type II alveolar epithelial cells as lamellar bodies (membrane-bound organelles containing whorls of phospholipid) and secreted into the alveolar lumen by exocytosis. Surfactant is a mixture of phospholipids mainly dipalmitoyl phosphatidyl-choline (DPPC), other lipids, and proteins. Excess surfactant is removed by pulmonary alveolar macrophages and by endocytosis into type Il cells.

Mechanism of action of surfactant

Surfactant particles spread as a monomolecular layer at the interface between air and fluid lining the alveoli. Each phospholipid molecule has a hydrophilic head and hydrophobic tail. The hydrophilic head dissolves in water lining the alveoli whereas, the hydrophobic tail is oriented towards alveolar air and doesn’t dissolve in the fluid. It scatters among the fluid molecules decreasing the attraction between them or repels surface molecules of the fluid away from each other therefore lowering the surface tension.

Type Il cells of the lung which form surfactant first appear in the human fetus at about 20 weeks of pregnancy and surfactant secretion is established by 30 weeks. If the Infant is born before that time, he may have a deficiency in surfactant which can cause infant respiratory distress syndrome.

Lung expansion is extremely difficult in absence of surfactant; it often requires very high negative intra-pleural pressure to overcome the collapse tendency of the alveoli. The surface tension in the lungs of these infants is high with areas of atelectasis (collapsed alveoli) and alveoli are filled with fluid.

Factors affecting the formation of surfactant

Factors that stimulate its formation are:

Factors that decrease the formation of surfactants are:

The respiratory muscles normally perform “work” only to cause inspiration and not to cause expiration. Expiration is almost entirely a passive process caused by elastic recoil of the lung and chest cage structures. The work of inspiration can be divided into three fractions: