Arterial PCO2 is the most important regulator. Both the rate and depth of breathing are controlled to maintain arterial PCO2 close to 40 mm Hg. In a normal awake individual, there is a linear rise in ventilation as arterial PCO2 reaches and exceeds 40 mm Hg. Changes in PCO2 are sensed by central and peripheral chemoreceptors, and they transmit this information to the medullary respiratory centers.

When arterial PCO2 increases suddenly as a result of increased metabolism, ventilation is stimulated rapidly, augmenting first the depth and later the frequency of inspirations to increase the rate of CO2 excretion till the arterial PCO2 falls back to normal. However, the response may take as long as 10 minutes to develop fully.

The central chemoreceptors account for 65% to 80% of the integrated response to respiratory acidosis under normoxic conditions. However, the response of the peripheral chemoreceptors is considerably more rapid. An increase in the arterial PCO2 from 40 to ∼45 mm Hg doubles ventilation. By contrast, hypoxia doubles ventilation only if PO2 falls by ∼50%.

Chronic hypercapnia occurs in many people with lung disease (e.g, emphysema-destruction of alveoli and loss of proper gas exchange) or with muscle weakness (e.g. neuropathies and myopathies). An increase in PCO2 leads to immediate respiratory acidosis in the arterial blood and brain.

If CO2 remains elevated, the pH of the CSF slowly recovers. The mechanism of this pHCSF increase is probably an increase in HCO3− flux into the CSF across the choroid plexus and BBB, representing a metabolic compensation to the respiratory acidosis. A higher PCO2 is needed to produce a given degree of CSF acidity (i.e., ventilatory drive).

Administration of supplemental O2 to such a patient may remove the hypoxic drive as well, causing ventilation to decrease and PCO2 to rise to very high levels (e.g., PCO2 > 100 mm Hg). At such high levels, CO2 acts as narcotic, depressing respiration. This “CO2 narcosis” then directly inhibits ventilation and can cause death from hypoventilation-a classic example of “too much of a good thing.” 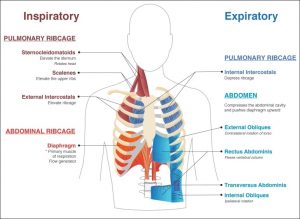 Physiological effects of exercise on your body

The major parameters that feedback on the respiratory control system are the blood gases-PO2, PCO2, and pH. In addition, the respiratory system receives input from two other major sources:

The CNS also must balance the need to control PO2. PCO2, and pH with the need to control ventilation for non-respiratory purposes, such as speaking, sniffing, and regulating temperature. In addition, the CNS must coordinate breathing with behaviors that require the absence of airflow, such as chewing, swallowing, and vomiting.

They are mechanoreceptors, located within the smooth muscle of the tracheo-bronchial tree, that detect changes in lung volume by sensing the stretch of the airway walls.

The slowly adapting PSR-responds to stretch with an increase in firing along the vagi, it results in cessation of inspiration by stimulating the off-switch neurons in the medulla. One of their functions is to inform the brain about lung volume to optimize respiratory output.

The Hering-Breuer reflex is one of the first examples of negative feedback, in which lung inflation inhibits the output of phrenic motor neurons thereby protecting the lungs from overinflation.

Because the reflex also increases the respiratory frequency, it maintains constant alveolar ventilation. This reflex may be important in controlling tidal volume during eupnea in human infants. In adults, this reflex does not occur until lung volume is greater than during a normal inspiration.

These irritant receptors are located in the epithelium of the airways Stimulated by: irritants (smoke and allergens) and a variety of chemical stimuli including serotonin, prostaglandins, bradykinin, ammonia, cigarette smoke, and ether.

An important function of these receptors may be to detect pathophysiological processes in the airway, such as chemical irritation, congestion, and inflammation. These receptors also detect histamine, which produces bronchoconstriction in asthma.

They are also located in the intercostal muscles, rib joints, accessory muscles of respiration, and tendons and they respond to changes in the length and tension of the respiratory muscles. Although they do not directly control respiration, they do provide information about lung volume and play a role in terminating inspiration.

Regulation Of Breathing During Muscular Exercise

What is the cause of intense ventilation during severe muscular exercise?