Lipid metabolism is the synthesis of lipids in cells, It involves the breakdown or storage of fats for energy and the synthesis of structural and functional lipids, such as those involved in the construction of cell membranes, Lipid metabolism begins with hydrolysis, which occurs with the help of various enzymes in the digestive system, It is considered as the digestion and absorption process of dietary fat.

Lipids are important dietary constituents, They are ingested mainly in the form of triglycerides (90% of the dietary fat), The rest is made up of phospholipids, cholesterol, cholesterol esters, and free fatty acids, The end products of digestion and absorption of dietary fat reach the systemic circulation in the form of chylomicrons, giving the milky appearance of serum after a fatty meal.

This milky appearance of serum is cleared by the action of a specific enzyme known as lipoprotein lipase (LPL) (clearing factor), This enzyme is located at the endothelial layer of capillaries of adipose tissue, muscles, and heart. It hydrolyses TG of the chylomicrons giving rise to glycerol and free fatty acids.

The glycerol will pass mainly to the liver or other tissues having active glycerokinase enzyme. Free fatty acids will enter the adipose tissue to be stored as TG (fed state) and partly pass in the blood bound to albumin to other tissues to be oxidized and give rise to energy.

Adipose cells are specialized for:

The hydrolysis of TG is done by tissue lipases:

In the fed state:

In the fasting state: 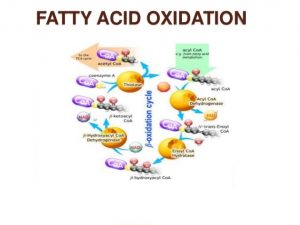 There are several types of fatty acids oxidation.

β Oxidation of Fatty Acids is the major pathway of oxidation of fatty acids, It is the process in which there is successive removal of 2 carbon fragments from the carboxyl end of fatty acids and involves its β-carbon, The process of β-oxidation occurs in mitochondria in most organs of the body.

Activation of fatty acids in cytosol

Prior to oxidation, in the cytosol of the cell, long-chain fatty acids are activated by fatty acid thiokinase (Acyl-CoA synthetase), Because 2 high-energy phosphate bonds are cleaved, two equivalent ATPs are used for fatty acid activation.

Transport of fatty acyl CoA from the cytosol into mitochondria:

Long-chain acyl CoA cannot readily traverse the inner mitochondria membrane and so a special transport mechanism called carnitine shuttle is needed. Carnitine is synthesized in the liver and kidney from lysine. It is essential for the oxidation of long-chain fatty acids (more than 12C atoms). Fatty acids with less than 12C atoms enter the mitochondria directly and activated by mitochondrial synthetase.

The energy yield from β-oxidation of fatty acids:

Each set of oxidation (round) results in one acetyl COA, one FADH2, and one NAD H+H+. In the oxidation of palmitoyl COA (16 C atoms) seven rounds occur, giving rise to 8 acetyl COA, 7FADH7,2NADH+H+. Each molecule of reduced FADH2 yields 2 ATP and each molecule of NADH+H+ yields 3 ATP when processed through the respiratory chain. So the reduced molecules of nucleotide give 35 ATP.

This type of oxidation occurs in the endoplasmic reticulum and mitochondria. It removes one carbon at a time from the carboxyl end of the molecule. It needs a hydroxylase enzyme that requires NADPH + H+, molecular oxygen, and cytochrome P450. It does not need CoASH. It does not aim for the production of energy but it is concerned primarily with the synthesis of hydroxyl fatty acids that are required for the formation of brain cerebrosides.

It is also needed for the oxidation of dietary fatty acids that are methylated at the β-carbon e.g. phytanic acid which is a significant constituent of milks and animal fat. In this case, β-oxidation is blocked by the presence of the methyl group at the β-carbon. So, α-oxidation proceeds first followed by β-oxidation.

In a certain genetic disease called Refsum’s disease, the patients lack a-hydroxylase and accumulate large amounts of phytanic acid in the brain giving rise to neuropathy, deafness, and blindness.

It is the formation of ketone bodies in the liver mitochondria. Ketone bodies are acetoacetate, β-hydroxybutyrate, and acetone (non-metobolized product). Under the normal fed state, the hepatic production of acetoacetate and β-hydroxybutyrate is minimal and the concentration of these compounds in the blood is very low (does not exceed 1 mg% or <0.2 mM).

The concentration of oxaloacetate is lowered if carbohydrates are unavailable (as in fasting) or improperly used (e.g. in diabetes mellitus). In such cases, oxaloacetate is used to form glucose (gluconeogenesis) and is unavailable for condensation with acetyl CoA to form citrate. Under these conditions, acetyl CoA is diverted to the formation of ketone bodies.

Both acetoacetate and β-hydroxybutyrate can be transported across the mitochondrial membrane and the plasma membrane of the liver cells, after which they enter the blood stream to be used as fuel by other cells of the body. In the blood stream, small amounts of acetoacetate are spontaneously (non-enzymatically) decarboxylated to acetone. It is volatile and cannot be detected in the blood.

Utilization of acetoacetate and B-hydroxybutyrate by extra-hepatic tissues. In the fasting state (glucose is in short supply) or in cases of uncontrolled diabetes mellitus (insulin defecieicy). Ketone bodies are utilized as fuel by muscles (cardiac and skeletal), brain, and kidneys in prolonged starvation.

The utilization of ketone bodies requires that acetoacetate is reactivated forming acetoacetyl CoA. This is done by a mitochondrial enzyme succinyl CoA-acetoacetate CoA transferase (thiophorase) presents in nonhepatic tissues (but absent from liver) that uses succinyl CoA as the source of the coenzyme A.

It is the accumulation of the ketone bodies in the blood (Ketonemia) and their appearance in the urine (ketonuria) together with acetone odour in the breath and acetone can be detected in urine.

Acetoacetic acid and β-hydroxybutyric acid are moderately strong acids. When these acids are present in the circulation, they must be buffered by the alkali reserve in the blood (HCO3). Their continual excretion in large quantities will lead to progressive depletion of the alkali reserve causing acidosis (ketoacidosis) and this can give rise to coma and death.

The causes of ketosis are: