The ascending (sensory tracts) involve several order neurons, the first order neuron for all sensations being the cell bodies in the dorsal root ganglia or the trigeminal ganglion which have their sensory afferent nerves.

They transmit the following sensations: 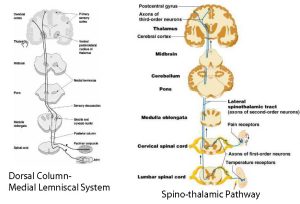 Their fibers are thick, myelinated rapidly conducting Aα and Aβ fibers that enter the spinal cord via the dorsal nerve roots and pass to the dorsal white column on the same side giving off collaterals that pass into the dorsal horn of grey matter and then ascend in the white matter tracts without a relay.

Fibers that carry sensation from the skin and muscles of the lower limbs and inferior aspect of the trunk (below T6 dermatome) ascend in the most medial part of the dorsal column forming the gracile tract (fasciculus gracilis) which is found in all spinal levels, whereas fibers from the upper part of the body (above T6) ascend in the lateral part of the dorsal column forming the cuneate tract (fasciculus cuneatus).

Axons of the gracile and cuneate nuclei cross to the opposite side as the internal arcuate fibers, and then ascend as the medial lemniscus to relay in the ventral posterolateral nucleus of the thalamus.

Axons of these cells ascend as the sensory radiation and terminate in the sensory area of the cerebral cortex in the postcentral gyrus of the parietal lobe.

Deficits after lesions in the dorsal column pathway

Patients with such lesions have a loss of proprioceptive sensation and thus are unable to identify the position of their limbs in space when their eyes are closed, a condition known as sensory ataxia, In addition, they may complain of paresthesia (abnormal sensation in the form of tingling or numbness) or loss of two-point discrimination, vibration and pressure sensations.

It transmits the following sensations:

The second-order neuron of the anterolateral system forms the following pathways:

The spinothalamic and spinoreticular tracts

The second order neuron is the dorsal horn cells from which fibers cross to the opposite side close to the central canal at all levels of the spinal cord and ascend to the brainstem. Fibers carrying stow pain and temperature sensation pass to the reticular formation and then to the intra-laminar thalamic nuclei indirectly (spinoreticular tract), whereas fibers carrying fast pain pass to the ventral posterolateral nucleus of the thalamus directly (spinothalamic tract).

Neurons in the intra-laminar thalamic nuclei are associated with arousal they project to insular cortex which keeps memory of the stimulus that resulted in pain: the anterior cingulate gyrus and other parts of the limbic system which process the emotional content of pain. The fibers from the ventral posterolateral nucleus of the thalamus project to the somatic sensory area in the post central gyrus.

They transmit the unconscious proprioceptive sensations. They include:

The thick myelinated AB fibers of the dorsal root ganglia enter the spinal cord along the dorsal nerve roots fibers. Fibers convey information from the muscle spindles and Golgi tendon organs in the skeletal muscles in the lower limbs, relay in Clarke’s nucleus at the base of the dorsal horn from T1 through 13 spinal segments and form the dorsal spinocerebellar tract.

Clarke’s column neurons are the second-order neurons for the dorsal spino-cerebellar tract. Fibers ascend from these neurons on the same side of the spinal cord in the posterolateral column of white matter up to the medulla, and then pass through the inferior cerebellar peduncle to terminate in the cerebellar cortex.

These are thick myelinated AB fibers that enter the spinal cord along the dorsal nerve roots fibers. The second-order neurons of this pathway arise from the grey matter of the spinal cord and receive a diverse input from proprioceptors and the descending tracts.

The fibers travel anterior to the dorsal spinocerebellar tract with some fibers (from upper limb) ascending on the fame side while others (from lower limb) crossing to the opposite side. Fibers ascend to midbrain, where the crossed fibers re-cross and with the uncrossed fibers through the superior peduncle to terminate in the cerebellar cortex, It conveys information to the cerebellum about the activity occurring in the motor tracts.

This tract is analogous to the dorsal spinocerebellar tract but conveys information from the muscles spindles and Golgi tendon organs in the skeletal muscles in the upper limbs and relays in the accessory cuneate nucleus in the medulla before reaching the cerebellar cortex.

The first-order neuron is the trigeminal ganglion which carries touch, proprioception, and pain and temperature sensation from the face, These fibers relay in the 3 trigeminal sensory nuclei (the second-order neurons) in the brainstem. Each receives a different type of sensory information.

The spino-olivary tract ascends from the spinal cord to the inferior olivary nucleus in the medulla, Its function is a motor learning and modifying motor actions.

It runs from the cervical cord to the superior colliculus of the midbrain. It integrates visual reflexes with tactile stimuli from the head and neck.