The large intestine is about 1.5 metres long and has an average diameter of about 6 cm. The functions of the large intestine are a recovery of water and electrolytes, formation and storage of faeces and fermentation of some of the indigestible food matter by bacteria.

Histological structure of the large intestine

Histological organization of the large intestine

The colonic mucosa is characterized by:

The colonic surface epithelium and the colonic crypts are lined by the following types of cells:

The lamina propria is formed of loose connective tissue, occupied by numerous intestinal glands. It is rich in lymphoid nodules located at the bases of the crypts. The muscularis mucosae underlying the bottom of the crypts and is formed of inner circular and outer longitudinal layers of smooth muscle fibers. 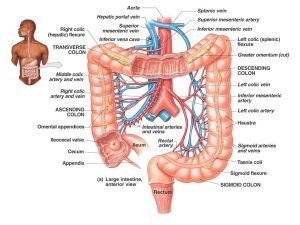 It is formed of loose connective tissue covered by the mesothelium. Small peritoneal projections filled with adipose tissue, the appendices epiploicae are seen protruding on the outer surface of the colon at the sites of the deficient longitudinal muscle fibers.

Histological structure of the vermiform appendix

The appendix is a blind-ended narrow evagination of the caecum. It is a significant part of the mucosa-associated lymphoid tissue (MALT).

Histological organization of a section in the appendix:

It has a narrow, irregular lumen that may be filled with dead cells, blood, and other debris.

It is similar to that of large intestine; however the crypts of Lieberkühn are characterized by the following: They are formed of a few numbers of widely-separated, short tubular glands. They have no digestive or absorptive functions in human. They are lined by:

The lamina propria is filled with loose (scattered lymphocytes) and dense lymphoid tissue (lymphoid nodules) occupying the spaces between the crypts and extending around the whole circumference of the appendix. The muscularis mucosae is not well-defined and is usually interrupted by the lymphoid tissue that penetrates into the submucosa.

It is a narrow layer that is also filled with lymphoid tissue.

It is formed of inner circular and complete outer longitudinal smooth muscle layers.

Junctional sites between the different parts of the alimentary canal

There are three main junctional sites along the alimentary canal that are of histological interest. They are studied by longitudinal sections at the site of the junction, thus demonstrating evident variations in the structure of their wall as passing down from a part to the successive one. These junctions are:

The submucosal esophageal glands may continue for a variable distance into the submucosa of the cardia.

The abdominal end of the esophagus has already acquired a mesothelial covering continuous with that of the stomach.

The surface epithelium undergoes gradual changes; the columnar surface mucous cells acquire a brush border and become absorptive cells. The epithelium starts to project into the lumen forming the typical villi of the first part of the duodenum. In the lamina propria, the intestinal crypts of Lieberkühn replace the pyloric glands. Scattered goblet cells appear in between the columnar cells covering the villi and lining the crypts.

The thick inner circular muscle layer that forms the pyloric sphincter becomes thinner towards the duodenum, as thick as the outer longitudinal muscle layer.

Both the pylorus and duodenum are covered by the visceral layer of the peritoneum.

The adventitia of the rectum is continuous with the connective tissue dermis of the peri-anal skin.

Clinical hint: the venous plexuses of the recto-anal junction might become dilated and congested leading to the development of piles (hemorrhoids).