The exocrine pancreatic secretion is considered the most important source of the digestive enzymes of the gastrointestinal tract. It is poured into the lumen of the small intestine. Pancreatic secretion contains enzymes for digesting the three major types of food: proteins, carbohydrates, and fats. It contains large quantities of bicarbonate ions, which have an important role in neutralizing the gastric acid chyme in the duodenum.

The exocrine portion of the pancreas consists of alveolar glands (acini) containing digestive enzymes in the form of (zymogen granules) which are discharged from the cells into the lumen of the pancreatic ducts. The small ducts unite together forming a single duct, the main pancreatic duct, which usually joins the common bile duct to form the ampulla of Vater.

The ampulla opens through the duodenal papilla, this opening is encircled by the “sphincter of Oddi”. Sometimes there is an accessory pancreatic duct that opens in the duodenum more proximally.

Pancreatic secretion is the most alkaline juice in the human body, About 1500 ml of pancreatic juice is secreted per day. Its pH is 8.3, It contains sodium bicarbonate in a concentration about 5-fold that of plasma, The flow of gastric acid chyme into the duodenum is the main stimulus for bicarbonate secretion. 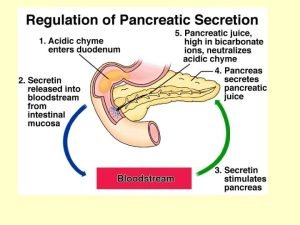 Bile and intestinal juices are also neutral or alkaline, and these three secretions neutralize the gastric acid, raising the pH of the duodenal contents to 6.0 to 7.0, The main enzymes present in pancreatic secretion are:

It is secreted in an inactive form and then activated to trypsin by an enzyme present in the intestinal secretion called enterokinase. Any amount of trypsin formed auto-activates the rest of the trypsinogen present, and also activates other proteolytic enzymes. The optimum pH for its action is between 8 and 9. It converts proteins into peptides of various sizes, but does not cause the release of individual amino acids. It is an endopeptidase.

It is secreted in an inactive form, and activated into chymotrypsin by trypsin. It is also an endopeptidase. It acts specifically on peptide linkages, which contain aromatic amino acids. Each proteolytic enzyme completes the action of the other.

This enzyme is activated by trypsin into carbyxypolypeptidase. It is an exopeptidase because it hydrolyses polypeptides separating the amino acid with a free carboxylic group.

This enzyme is activated by trypsin to the active form elastase. It attacks the elastic fibers. It cleaves peptide bonds of aliphatic amino acids.

This enzyme hydrolyses starches, glycogen, and most other carbohydrates except cellulose to form oligosaccharides (maltose, maltotriose and a-dextrins). Chloride ions serve as a coenzyme for it. It has a more powerful action than salivary amylase; it can split the uncooked starch.

Other constituents of pancreatic juice

Once trypsin is activated, there is an autocatalytic chain reaction. The release of any minute amount of trypsin into the pancreas is very dangerous because it gives many active enzymes which might digest the pancreas itself. However, activation of proteolytic enzymes occurs only in the intestine.

This is because the pancreatic acini that secrete the enzymes secrete at the same time a trypsin inhibitor, this substance is stored in the cytoplasm of the glandular cells surrounding the zymogen granules, and prevents activation of trypsinogen in the pancreas, thus protecting it from autodigestion.

Pancreatic secretion, like gastric secretion, is regulated by both nervous and hormonal mechanisms, but hormonal regulation is more important. Little secretion elaborates during fasting. After intake of the meal, pancreatic secretion starts after a few minutes by reflex action. Then the flow of juice is augmented when the acid chyme enters the duodenum. The secretion reaches a maximum level 3 hours after meals and greatly declines when the stomach is emptied.

The nervous type of secretion occurs by both conditioned and unconditioned reflexes, it is abolished by atropine, The same nervous signals from the brain that cause secretion in the stomach also cause acetylcholine release by the vagal nerve endings in the pancreas, It stimulates pancreatic acinar cells to cause the discharge of zymogen granules, The nervous type of secretion is small in amount, rich in enzymes but deficient in alkali and water.

It is a polypeptide of 27 amino acids, Secretin is secreted by S cells that are located in the mucosa of the upper portion of the small intestine, It is present in an inactive form, pro-secretin, The entry of acid chyme to the duodenum leads to the release and activation of secretin, It circulates in the blood and reaches the pancreas via its arterial blood supply.

Secretin causes copious secretion of a very alkaline pancreatic juice poor in enzymes, It is believed to act on duct cells which probably secrete water and bicarbonate, The release of secretin by acid is an example of negative feedback control, Secretin causes alkaline pancreatic juice to flood into the duodenum neutralizing the acid from the stomach and thus inhibiting further secretion of the hormone.

What is the importance of this large volume of alkaline pancreatic secretion?

Cholecystokinin hormone is released from the I cells at the mucosa of the upper small intestine in presence of digestive products or proteins, and fats, In addition to its secretion by I cells in the upper intestine, CCK is found in nerves in the distal ileum and colon, It is also found in neurons in the brain, especially the cerebral cortex, and in nerves in many parts of the body.

Pancreatic actions of CCK: Cholecystokinin evokes pancreatic secretion rich in enzymes and poor in water and bicarbonates, which is similar to the effect of vagal stimulation, Because the bile and pancreatic juice that enter the duodenum in response to CCK further catalyze the digestion of more protein and fat.

The products of this digestion stimulate further CCK secretion, a sort of positive feedback that operates in the control of the secretion of this hormone, However, the positive feedback is terminated when the products of digestion move on to the lower portions of the gastrointestinal tract, It also augments the action of secretin on the pancreas, In addition, CCK stimulates the release of glucagon.

It stimulates the secretion of water and bicarbonate from the pancreas, but it is weaker than secretin. VIP is found in certain neurons and endocrine cells throughout the intestine.

They form the mobile part of the small intestine, suspended from the posterior abdominal wall by a mesentery.

Differences between jejunum and ileum:

Mesentery of the small intestine

It is a fan-shaped peritoneal fold that has an anterior free border and posterior attached border. The anterior border contains coils of jejunum and ileum and is 6 meters long. The posterior border is attached to the posterior abdominal wall..the root of the mesentery and is about 6 inches long.

1. Attached border (called the root of mesentery): It is 6 inches, and extends from the duodenojejunal flexure to iliocaecal junction.

Structures crossed by the root of the mesentery (6):

Contents of the mesentery