Normally the liver manufactures a minute amount of bile salts because about 95% of the already formed bile salts are reabsorbed again from the small intestine into the portal blood and re-secreted by the liver with bile (entero-hepatic circulation of bile salts).

The remaining 5-10% of the bile salts enter the colon and are converted to the salts of deoxycholic acid and lithocholic acid, Lithocholate is relatively insoluble and is mostly excreted in the stools, However, deoxycholate is absorbed.

1. Digestion of fat: Bile salts have no direct digestive effects, but help fat digestion by their emulsifying or detergent function, Emulsification decreases the surface tension of the particles and allows a good surface area to be exposed to the action of pancreatic lipase, Bile salts also activate lipase enzymes. 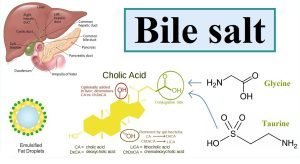 2- Absorption of fat: Bile salts tend to form cylindrical water-soluble disks called “micelles”, The micelle contains fatty acids, monoglycerides, phospholipids, and cholesterol, Thus, it solubilizes the lipids and provides a mechanism for their transport to the enterocytes, The micelles move down their concentration gradient through the brush border of the intestinal mucosal cells, where they are absorbed.

Then, the lipids diffuse out of the micelles, and the absorbed bile salts are transported back to the liver in the portal vein and re-excreted in the bile (enterohepatic circulation), Bile salts have the ability to dissolve the insoluble fatty acids in water, thus the fatty acids formed are removed from the medium and new molecules of neutral fat are exposed to the action of pancreatic lipase.

3. Solvent action: Because bile salts prevent the precipitation of cholesterol and fatty acids by keeping them in solution, they guard against gall stones formation.

4. Choleretic function: Bile salts are the best choleretics (stimulants for bile secretion by liver cells), Absorption of any amount of the secreted bile salts in the intestinal mucosa, passes via the portal circulation to the liver, leading to stimulation of bile secretion

5. Stimulation of peristalsis: Bile salts stimulate the motility of the intestine and colon and prevent constipation.

Hepatic cells continuously secrete bile under low biliary pressure, Any factor which stimulates bile secretion is called “choleretic”. This is controlled by:

Increased portal blood during digestion increases bile secretion, but when the liver is markedly congested bile secretion stops due to an increase in the intrahepatic vascular pressure.

Functions of the gall bladder

Bile flows into the duodenum only after ingestion of food, In between the meals, the sphincter of Oddi is closed and bile flows back to the cystic duct to be stored in the gall bladder.

2- Concentration and acidification of bile

The total daily secretion of bile is about 500 ml, while the maximum volume of the gall bladder is only 40-70 ml. Nevertheless, as much as 12 hours of bile secretion can be stored because its water, sodium chloride, and most other small molecular weight electrolytes are absorbed by the gall bladder mucosa.

The other bile constituents are concentrated, Bile can be concentrated up to 10 or 12 times, Acidification is done by absorption of its NaHCO3 content, which prevents the precipitation of insoluble calcium salts, and the formation of gall stones, Also, acidity has a bactericidal effect.

The gall bladder equalizes the pressure in the biliary system, By storing bile, it prevents any increase in pressure in biliary passages, This enables the liver to secrete because hepatic cells cannot secrete against high pressure.

5- Evacuation of bile when needed

Hepatic cells secrete bile at low pressure, about 7 cm H2O. The tonic contraction of the sphincter of Oddi is equivalent to 30 cm H20 when it is closed (in between meals). After ingestion of food, there is a partial relaxation of the sphincter with a tone of about 10 cm H20, synchronous with contraction of the gallbladder with a pressure equal to 20 cm H20, In this case, the bile flows from the gall bladder together with the fresh bile coming from the liver to the duodenum.

1. Hormonal factor: Cholecystokinin (CCK). This local hormone is secreted when fatty acids or amino acids reach the duodenum. It circulates in the blood and passes to the gall bladder via its blood supply and leads to contraction of the gall bladder wall and evacuation of its contents into the duodenum.

It can be concluded that the hormonal factor is the most important in bile secretion and evacuation.