Nanorobots play a vital role in the field of Biomedicine, Especially in the treatment of cancer, Cerebral Aneurysm, kidney stones removal, also to remove the defected part in our DNA structure and some other treatments that have the greatest aid to save human lives, Nanorobots can be programmed to repair specific diseased cells, functioning in a similar way to antibodies in our natural healing processes.

Nano-robotics is the technology of creating machines or robots close to the microscopic scale of a nanometer (10−9), Nanorobotics range from 0.1-10 micrometers, They are made up of nanoscale or molecular components, The names nanorobots, nanoids, nanites or nanomites are used to describe these hypothetical devices, Nanorobots can be used in many application areas such as medicine & space technology.

Nanorobotics refers to the largely hypothetical nanotechnology engineering of designing and building nanorobots, They are known as a controllable machine, Although the field of nanorobotics is different from that of the macro-robots due to the differences in scale & material, there are many similarities in design & control techniques that could be projected and applied.

Nanotechnology is used in agriculture, energy, electronics & many other fields, Nanotechnology can be defined as a description of activities at the level of atoms & molecules that have applications in the real world, In order to achieve cost-effectiveness in nanotechnology, it will be necessary to automate molecular manufacturing, The engineering of molecular products needs to be carried out by robotic devices, which have been termed nanorobots. 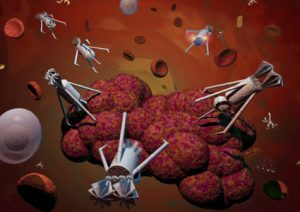 The field of microbiology has been used as a springboard for the initial development of robotic functions in nanobiotechnology, Although microrobots and nanorobots can be constructed and have function, their use within the vascular system is limited by challenges with transportation and propulsion, An effective strategy for enabling propulsion of microrobots and nanorobots is coupling them to magnetotactic bacteria.

Nano-robots can be implemented by using many components such as sensors, actuators, control, power, communication and by interfacing cross-special scales between the organic-inorganic systems, they can be used to maintain & protect the human body against pathogens.

Development of nanorobots is done by using Biochip, The combination of nanotechnology, photo-lithography and new biomaterials, can be considered as a possible way required for designing technology to develop nanorobots for medical applications such as diagnosis and drug delivery, This realistic approach in designing nanorobots is a methodology which is used in the electronic industries.

Nubot is the acronym for nucleic acid robots, Nubots are manmade robotics devices at the Nanoscale, Nanofactory collaboration aims at developing positionally controlled mechanosynthesis and diamondoid nano-factory which is capable of constructing a diamondoid medical nanorobot, Escherichia coil bacteria uses a flagellum for propulsion purpose, The use of electromagnetic fields is to control the motion of biological integrated device and its limited applications.

Nanotechnologies are rapidly emerging within the realm of medicine, this subfield has been termed nanomedicine, Nanoparticle technology is used in pharmaceutical technology, Nanotechnological development is the building of nanorobots, Nanorobots are devices with components manufactured on the nanoscale.

Nanorobots can perform surgery at the cellular level, removing individual diseased cells and repairing defective portions of individual cells, they can eliminate the bacterial infections in the patient within minutes, instead of using treatment with antibiotics over a period of weeks, They can repair cellular level conditions that cause the body to age.

Nanotechnology can be used in the development of improved imaging techniques for higher sensitivity in the detection of cancer and illness, improved targeting of drug treatments, It can decrease in the number of adverse effects of chemotherapy, and the enhanced effectiveness of other antineoplastic therapies such as cryotherapy and ultrasound.

Surgical nanorobots can be introduced into the human body through vascular systems and the other cavities, They act as semi-autonomous on-site surgeon inside the human body and they are programmed or directed by the human surgeon, nanorobot performs many functions like searching for pathogens, and diagnosis & correction of lesions by nano-manipulation synchronized by the onboard computer while conserving and contacting with the supervisory surgeon through coded ultrasound signals.

Nanorobots can treat genetic diseases, by relating the molecular structures of DNA and proteins in the cell, The modifications and irregularities in the DNA and protein sequences are corrected, The chromosomal replacement therapy is very efficient compared to the cell repair, An assembled repair vessel is inbuilt in the human body to perform the maintenance of genetics by floating inside the nucleus of a cell.

The nanomachine pulls the strand of DNA which is unwounded for analysis, meanwhile the upper arms detach the proteins from the chain, The information which is stored in the large nanocomputer’s database is placed outside the nucleus and compared with the molecular structures of both DNA & proteins that are connected through communication link to cell repair ship, The abnormalities found in the structures are corrected, and the proteins reattached to the Deoxy Nucleic Acid chain reforms into their original form.

Nanorobots can be used as ancillary devices for processing different chemical reactions in the affected organs, They are useful for monitoring and controlling the glucose levels in diabetic patients, Nanodentistry are used in dentistry, nanorobots are used in desensitizing tooth, oral anesthesia, straightening of an irregular set of teeth and improvement of the teeth durability, major tooth repairs and improvement of the appearance of teeth, etc.