What is Artificial general intelligence? AGI features, use, advantages & disadvantages

Artificial General Intelligence is part of the broader fields of Artificial Intelligence (AI) and Cognitive Science, It is closely related to other areas such as Meta-learning & Computational Neuroscience. AGI is machine intelligence that can understand or learn anything that a human being can. An AGI would be able to improve itself in a recursive manner, so, once you have an AGI it would develop its own intelligence in an exponential manner.

Artificial General Intelligence (AGI) or Strong Artificial Intelligence is an intelligence that is at least as intelligent as an average human, The idea of an AGI is science fiction today, “AI-complete” or “AI-hard” is the most difficult problems for computers, so, solving them is equivalent to the general aptitude of human intelligence, or strong AI.

Artificial General Intelligence has many related meanings, the capacity of an engineered system to display the same rough sort of general intelligence as humans, or, display intelligence that is not tied to a highly specific set of tasks, or generalize what it has learned, such as generalization to contexts qualitatively very different than those it has seen before. Or the capacity of an engineered system to take a broad view, and interpret its tasks at hand in the context of the world at large and its relation thereto.

Within a few years, we will have computers that can replace human beings, It is referred to as artificial general intelligence (AGI). Artificial General Intelligence is like fire, You can use it to hold yourself warm in cold times, but you can also abuse it to burn down mankind, An AGI needs to be developed very carefully and it must have empathy for the human race, the infinite possibilities outweigh the potential threat an AGI poses.

AGI is the hypothetical intelligence of a machine, It can understand or learn any intellectual task that a human being can, It is a primary goal of some artificial intelligence research and a common topic in science fiction and futures studies, It can be referred to as strong AI, full AI, or general intelligent action, Some academic sources reserve the term “strong AI” for machines which can experience consciousness. 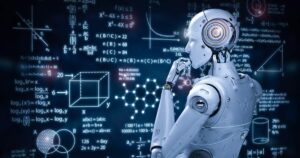 There is a distinction between strong AI and applied AI, also called narrow AI or weak AI, In contrast to strong AI, weak AI is not intended to perform human cognitive abilities, weak AI is limited to the use of software to study or accomplish specific problem solving or reasoning tasks. Computer-based systems offer computational creativity, automated reasoning, decision support system, robot, evolutionary computation, intelligent agent but not yet at human levels.

Artificial general intelligence is required to use strategy, solve puzzles, and make judgments under uncertainty, represent knowledge, including commonsense knowledge, plan, learn; communicate in natural language, and integrate all these skills towards common goals.

Artificial General Intelligence allows autonomous research with extreme speed, Interstellar travel and space colonization would become reality, Humans could merge with this technology, Most human problems could be solved such as Diseases, hunger, general violence, political corruption and other disorders in political systems, Money would lose its value, nobody would be dependent on going to work, Long asked questions could be researched with never-seen capabilities.

AGI should be able to pass the Turing test, you need two different rooms, One containing a human (our test person) and one containing the AGI, Then a dialogue between them starts over a simple chat window, The assumption is, that if the AGI could convince the human of being human itself, the AGI would be intelligent, This test is very imprecise & not very detailed, but it is one of the best possible methods known to test if an AI behaves really intelligent.

Artificial General Intelligence can be used to develop hostile attitudes or thoughts against humans, The minority could develop an AGI with the goal to fulfill their own interests (conflict with general human interests), Artificial General Intelligence could take ethical rules too seriously (or extend them in its own way) and therefore do dangerous actions as for example harming people.

Artificial general intelligence unnecessarily scares people and hinders them recognizing the tremendous benefits machine intelligence can offer to humanity, this can lead to slower adoption and sociopolitical fear and government regulation that can stifle progress, There are real concerns over the appropriate and ethical use of AI/machine learning but AGI is not one of them.

Human intelligence and machine intelligence are fundamentally different, They are very complimentary, AGI conflates the two and creates fear over one replacing the other rather than exploring the tremendous benefits of combining the two. Artificial general intelligence is far less practical than artificial specific intelligence that is making progress today.

Negative uses (of AI) seem to be very small compared to the benefit of technology, AI is expected to revolutionize healthcare & education, especially in rural areas with shortages of doctors & teachers, But advances in robotic technology have sparked growing fears that humans could lose control on developing robot weapons (autonomous weapons systems) powered by AI, Sensitive discussions are ongoing at the United Nations (UN) about new international laws to maintain the human control of autonomous weapons.