Robots can be useful for teaching language to children, children can enjoy learning the language with a robot, robots are more successful in teaching language than other digital devices, Although social robots have potential as a language teaching tool, Robots are not as effective as human teachers, The educational benefits of robots have not been evaluated thoroughly and technology in robotics is advancing quickly.

Technology can be used in early education, It has gained considerable attention as digital devices (e.g., smartphones and tablets) have developed and been integrated into children’s lives, robots can help young language learners, they allow children to learn first & second languages, They are autonomous or semiautonomous robots, They can interact & communicate with humans by following the behavioral norms expected by the people with whom the robots are intended to interact.

Robots can understand their environment by structuring their own sensory information in an unsupervised manner, Robots are superior to human intelligence in learning by using labeled data to perform specific tasks, all supervised labels can’t be obtained for all the sensory information required by robots, Algorithm lets robots to learn concepts & language. 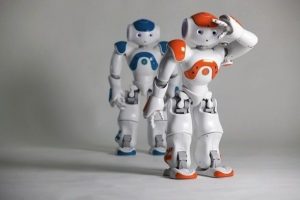 Robots can collaborate & communicate through trial and error, remembering the symbols, words & signals that help them to achieve a goal and storing them in a private recurrent neural network, Robots can speak directly to students & respond to their emotional cues, If a child is bored or if it senses contentment, the robot will adapt its approach.

Social robots help vocabulary development in children with ASD (Autism Spectrum Disorders) through distrust and deception games, Children can interact in various combinations with adults by a touchscreen computer game, and a social robot, for children with ASD, a robot can be a more effective learning companion than computers or human adults, Social robots can be beneficial for individuals with ASD who face communication difficulties because practicing communication can be less intimidating with a robot than with another person.

Children are motivated to learn with a robot, robot language tutors are particularly effective, insufficient evidence supporting the unique benefits of robot tutors should not be taken as definitive for two reasons: the dearth of empirical research and the advances of technology.

Social robots may be more beneficial in teaching specific aspects of language or specific groups of people, In addition to vocabulary learning and language production, other aspects of language (e.g., pronunciation) should be explored, Another topic worth investigating is the role of robots, which includes but is not limited to tutor, care-receiver, and teaching assistant.

Manipulating specific features of robots such as adaptivity & contingency may result in more effective learning because it is impossible to draw a conclusion that applies to all robots, the robot tutor will be compared directly to a tablet, the target words are math & spatial concepts, many of which have conventional gestures robots can perform.

Learning language with a human teacher benefits children, but successful learning takes more than just classes at school, Social robots can contribute to the early language learning experience in unique ways, They can supplement & enhance the experience, a robot can play the role of a human through vocal, gestural, and facial expressions.

Robot tutors can perform actions & gestures, a humanoid robot (a robot that resembles a human in appearance) can point to a physical object or open its arms to represent the meaning of the word big, Robots are adaptive through sensors, they can detect humans’ motivational and educational needs and change their behavior accordingly, learning outcomes are maximized when a task is not too difficult but challenging enough for a child.

Robot teachers that can gesture may be especially effective for children because children benefit from gestures more than adults in human-human interaction, gestures can improve speech comprehension in a second language in less skilled learners, and gestures increase children’s attention to learning materials, robots can offer lessons that are more adaptive & interactive.

It is difficult for classroom teachers to adjust lesson levels to each child, the robot teachers can serve as a supplementary tool, especially when children can practice one on one with the robot, Social robots offer unique support for young language learners, Although parents & educators put less focus on engagement than on learning outcomes, engagement is a critical measure because children learn best when they are engaged and children should interact with robots.

Most children find learning language with social robots engaging, English skills can be practiced in a group lesson led by a human teacher with or without a humanoid robot, Children who studied with the robot are more motivated & satisfied with learning materials, and are less anxious than their counterparts who studied without robots.

English speakers can enjoy learning with a robot, Children can learn English words from a humanoid robot, They can engage & imitate the robot’s movements as instructed, Children like robots & prefer to learn from a robot than a tablet or a human, children’s interest in robots contributes to their learning, and teachers found a robot useful after using it in class.

The appearance of a robot is usually novel to children & can easily grab their attention, elementary schoolers are very interested in interacting with a robot English tutor, the physical embodiment of robots may have different effects, depending on learners’ language proficiency.

Social robots can teach new words to children successfully, English speakers can learn words by a tablet-based learning activity with a robot, learned English verbs by teaching the words to the humanoid robot, The children can identify corresponding pictures more successfully for the verbs they learn by the robot than for the verbs they learn from a human experimenter.

Young children can learn words from a robot, However, this does not necessarily mean that robots are more effective than other devices or humans in teaching language, native speakers learned stories either by interacting with a robot or by watching the stories on an electronic book, Children can improve their vocabulary knowledge, they can learn equally well from a robot, a human teacher, and a tablet.

Robots are not more effective at teaching words than other digital devices or human teachers, except for the sign language study in which beginners benefited from the physical presence of a robot, Sign language may be a promising direction because performing actions is a unique strength of robots, robots may not confer more advantages than other mediums, However, the implications differ in language production.

Although advances in the hardware & software of robots, The technical features of robots fail to meet the full potential of social robots, developing a reliable system for recognizing children’s speech automatically is a challenge because of factors such as the ungrammaticality of children’s utterances and rapid developmental changes in the phonetic characteristics of children’s speech.

The importance and uses of the educational robotics for the students