Metabolism provides your body with energy for essential body functions such as breathing and digestion, Your body needs a minimum number of calories (the basal metabolic rate or BMR) to sustain these functions, Factors such as age, sex, muscle mass, and physical activity affect metabolism or BMR.

1. Muscular exercise. It is the most important factor affecting the metabolic rate.

Maximal muscular exercise can increase the metabolic rate up to 20 folds in trained athletes. Oxygen consumption and the metabolic rate are increased not only during exertion but also for some time after the end of the exercise to repay the oxygen debt. Metabolic systems that supply energy for muscle contraction. They differ according to the intensity of the exercise, its duration and the type of diet eaten by the person (high carbohydrate, mixed diet, or high-fat diet).

It can provide maximal muscle power for 8 to 10 seconds. It is almost enough for the 100-meter run or running a 50-meter dash jumping, weight lifting, diving, and football dashes.

Cr P is 3-8 times as abundant as ATP and the amount of energy obtained from hydrolysis of Cr P (13Kcal/mole) is more than the energy required to form ATP from ADP (12Kcal/mole). 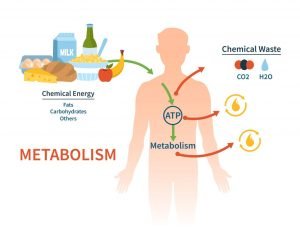 It is used when large amounts of ATP are required for short to moderate periods of muscle contraction as during 100 meters swim and a 400-meter dash. It can provide 1.3 to 1.6 minutes of maximal muscle activity in addition to the 8 to 10 seconds provided by the phosphagen system but with reduced muscle power.

However, it is about one-half as rapid as the phosphagen system. The glycogen stored in the contracting skeletal muscles splits into glucose, undergoes anaerobic glycolysis, and splits into 2 pyruvic acid molecules. Then most of the pyruvic acid is converted into lactic acid with the formation of amounts of ATP.

The energy to perform long-term exercise comes primarily from the aerobic system as running a marathon and jogging. In the presence of oxygen, pyruvic acid is completely oxidized in the mitochondria and gives more ATP molecules. In addition, different foodstuffs (glucose, but most importantly fatty acids) are also In oxidized in the mitochondria, to release tremendous amounts of energy, used to reform ATP. Although the aerobic system is slower than the other 2 systems, it enables the muscle to contract for an unlimited time, as long as nutrients last (such as fat).

Oxygen debt is the extra consumption of oxygen after completion of severe exercise. After a period of hard exercise, a person continues to breathe hard and to consume large amounts of oxygen for at least a few minutes and sometimes for as long as 1 hour after it.

Uses of the oxygen debt

This additional oxygen is used to:

The SDA of food is the obligatory energy expenditure that occurs during the assimilation of food into the body. It may last up to 6 hours after food intake. Its exact cause is not certain. However, several theories may explain it:

Factors affecting the SDA of food

1. Type of food. An amount of proteins sufficient to provide 100 Kcal increases the metabolic rate of a total of 30 Kcal. A similar amount of calories of carbohydrate origin increases it 6 Kcal and of fat 4 Kcal.

2. Amount of food. Because proteins have the highest SDA, the greater the proteins ingested, the more the increase in the metabolic rate. The heat liberated as a result of SDA is generated above that produced by the BMR and work and is derived from the energy stores of the body.

Example: if the daily energy requirement of an individual is 3000 Kcal and this amount is supplied by proteins only, the metabolic rate would increase by 900 Kcal (3000 x 30/100). So, the energy output will be 3900Kcal and not 3000Kcal. This excess heat is derived from the energy stores of the body, thus, prolonged protein ingestion would lead to loss of body weight.

5. Stimulation of the sympathetic nervous system increases the metabolic rate due to:

6. Sleep: The metabolic rate falls to 15% below normal during sleep due to:

7. Age: the metabolic rate of a young child in relation to his size is greater than that of an old person. This results from high rates of cellular reactions including those needed for growth.

10. Malnutrition and prolonged starvation. Prolonged malnutrition can decrease the metabolic rate as much as 30 % due to a deficiency of necessary food substances in the cells. Prolonged starvation, and decreased metabolic rate is attributed to the depression of the sympathetic nervous system, decreased catecholamine levels, and a fall in the biologically active thyroid hormone. This explains why an individual reduces weight, the loss is initially rapid then slows down.

12. Pregnancy and lactation: both increase the metabolic rate.