Water soluble vitamins are members of the B-complex and vitamin C. All of them are polar, hydrophilic molecules, They are readily excreted in urine once their concentration exceeds the renal threshold thus toxicities are rare while deficiencies are common, Most of them are coenzymes, or converted to coenzymes which are utilized either in the pathways for energy generation or hematopoiesis.

Human nutritionally essential B vitamins are:

Chemistry: Thiamin consists of a substituted pyrimidine joined by a methylene bridge to a substituted thiazole. Requirements: 1-2 mg/day. 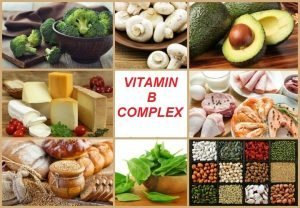 Chemistry: It consists of a heterocyclic isoalloxazine (flavin) ring attached to the sugar alcohol D-ribitol.

Functions of vitamin B2

Flavin mononucleotide (FMN) is formed by ATP-dependent phosphorylation of riboflavin, whereas flavin adenine dinucleotide (FAD) is synthesized by a further reaction with ATP in which the AMP moiety of ATP is transferred to FMN Biosynthesis of FMN and FAD seems to occur in most tissues.

Flavoproteins undergo a reversible reduction of the isoalloxazine ring to yield the reduced forms FMNH2 and FADH₂.

It is manifested by cheilosis, angular stomatitis, glossitis, seborrhea (dermatitis), occular disturbances (photophobia), and vascularization of the cornea.

Chemistry: Nicotinic acid is a monocarboxylic acid derivative of pyridine. Some niacin could be synthesized from tryptophan by plants and most animals and this pathway requires pyridoxal phosphate, but this conversion is insufficient and most people require dietary sources of both tryptophan and niacin.

Nicotinate is the form of niacin required for the synthesis of NAD+ (nicotinamide adenine dinucleotide) and NADP+ (nicotinamide adenine dinucleotide phosphate), NAD+ and NADP+ are coenzymes of many oxidoreductase enzymes occurring both in the cytosol and within the mitochondria, Generally, NAD+-linked dehydrogenases catalyze oxidoreduction reactions in oxidative pathways, e.g. citric acid cycle.

Whereas NADP+-linked dehydrogenases or reductases are often found in pathways concerned with reductive synthesis e.g. pentose phosphate pathway, The mechanism of oxidoreduction involves a reversible addition of a hydride ion (H−) to the pyridine ring plus the generation of a free hydrogen ion (H+).

Dehydrogenase that may use either pyridine nucleotide Coenzymes:

Sever deficiencies lead to pellagra which is characterized by the three Ds dermatitis. diarrhea and dementia (lack of concentration). Dermatitis is usually seen in skin areas exposed to sunlight and is symmetric. It is in the form of pigmentation and thickening of the skin.

Neurologic symptoms start by nervous disorders and mental disturbances, In the latter stages, dementia occurs, Pellagra is seen in patients with severe malabsorption problems, in malignant carcinoid syndrome, in Hartnup disease, and in the elderly on a very restricted diet.

Chemistry: Pantothenic acid is an amide of pantoic acid and β-alanine.

Active pantothenic acid is present in the structure of coenzyme A (COA) and the acyl carrier protein (ACP). The thiol group (-SH) in both COA and ACP acts as a carrier of acyl radicals (R-CO) in enzymatic reactions involved in: