The human body consists of many systems such as cardiovascular, respiratory, nervous etc., each system is made of organs; each organ is made of tissues, which in turn are made up of cells.  The cell is the fundamental living unit of the body. However, many cells of the body differ from one another, all of them have certain basic characteristics that are alike. Every cell is adapted to perform one or a few particular functions.

Composition of the human body

About 60% of the young adult male body weight is fluid. A man, who is weighing about 65 kg, has total body water (TBW) = 40 liters. However, the amount of body water decline with age and is affected by the quantity of body fat.

ECF is further subdivided into Interstitial and Intravascular. Interstitial (between the cells) into the tissue spaces (12 liters), Intravascular (inside the blood vessels) is the blood plasma (3 liters). Transcellular (500ml) is found in special compartments in the body such as in the pleura, and in the joint cavities.

18 % of the bodyweight is a protein that is found in the structure of all tissues, but the largest amount is found in skeletal muscles.

15% of the body weight is fat which constitutes the main energy stores of the body, found around abdominal viscera, in subcutaneous tissues, and in the structure of the central nervous system. and the structure of cell membranes contains Phospholipids. 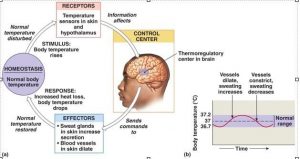 Homeostasis is the ability of the body to maintain nearly constant conditions in its internal environment inspire of changes in the surroundings. all organs & tissues of the body perform functions that help maintain homeostasis. The homeostatic mechanisms are the regulatory mechanisms that tend to correct any deviation from normal in response to changes in the external or internal environment.

The control systems of the body

The disease is often considered to be a state of disrupted homeostasis. The body depends mainly on two major control systems for the regulation of all its functions; the nervous and endocrine systems. Many interrelationships exist between the endocrine and nervous systems. The nervous system is responsible for the functions that need rapidity of execution, e.g. applying a hot object to the hand causes immediate flexion of the arm to withdraw it from such harmful hot object.

Sensory receptors can detect the state of the body or the state of the surroundings. The human brain can store the information, generate thoughts, create ambition, and determine the reactions that the body performs in response to the sensations, suitable signals are transmitted through the motor output portion of the nervous system.

The autonomic system is an important segment of the nervous system. It can control many functions of the internal organs, including the pumping activity by the heart, movements of the gastrointestinal tract, and secretion by many of the body’s glands.

The endocrinal system is composed of many endocrine glands and several organs and tissues that secrete chemical substances called hormones into the bloodstream, Hormones are transported in the extracellular fluid to other parts of the body to help regular cellular function.

The endocrine system is concerned with the functions that do not need rapidity of execution e.g. thyroid hormone increases the rates of most chemical reactions in all cells and Insulin controls glucose metabolism.

All homeostatic control mechanisms have at least three main components:

Most homeostatic control mechanisms of the body act as negative feedback. When some factor becomes excessive or deficient, the control system initiates a series of changes that return it back toward a certain mean value. In negative feedback, the output response is opposite to the stimulus, and shuts it off or reduces its intensity.

Childbirth is a positive feedback mechanism. When uterine contractions become strong enough to push the baby’s head through the cervix, the stretched cervix sends signals to the pituitary gland to secrete the oxytocin hormone, that circulates in the blood to reach the uterine muscles causing even more powerful contractions. Thus, the uterine contractions stretch the cervix, and the cervical stretch causes stronger concentrations. When this process becomes powerful enough, the baby will be born.

Homeostatic Imbalance: Homeostatic is so important that most of the diseases can be regarded as a result of its disturbance, a condition called homeostatic imbalance.

There is a functional relationship between the systems of the body. such as during muscular exercise, many systems increase the oxygen needs of the active muscles and remove the waste products such as CO2 and the heat liberated during exercise, and enable the muscles to act for a long time without fatigue.